The Duke of Tarentum in South Uist 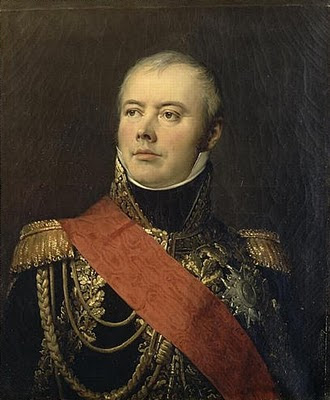 Among Alexander Carmichael’s fieldwork notebooks are a few mentions of the Duke of Tarentum. This was none other than Marshal MacDonald (1765–1840) whose father, Neil MacEachen (later MacDonald) of Howbeg, had been born in South Uist. The Marshal was feted by all when he visited Britain and the memories of seeing this dashing French Marshal in the native land of his forebears was not lost on the older Uist folk who would have met him (and perhaps might have even spoken with him) when he came to the Hebrides in 1825. Fortunately for posterity the Marshal left a travel diary recording his visit to and the which was the subject of a recent publication, The French MacDonald, edited by Jean-Didier Hache (along with a contribution by Domhnall Uilleam Stiùbhart). One of the overriding reasons for this visit was his search for family roots, a popular reason for many people travelling to , especially the Highlands and , from where thousands upon thousands emigrated. It is perhaps an historical irony that while the Marshal was visiting the number of people leaving their native land, whether it was forced or voluntary, had yet to reach its peak:
Came to Uist ab[ou]t 46 [years ago]. Left 10£ a year to his
cousin[s] Alast[air] & Isebel each as long as they lived.
His nephew a count along with him. He had 2
sister[s]. Had one son – No English – I cant speak
to you but Ill send you my son. He then got
an English tutor to his son. The son died & the
pro[eeds] claimed by a man fr[om] America.
Raol had a son John [del: who had a son Tonas]
who was a cooper in the Customs In Greenock
who had a son Thomas who went to Quebec.
Probably this was the claimant. he came
to Paris to see the Duke who behaved kindly
to him. Duke sharp – knew his relatives
by sight. He w[ou]ld be ab[ou]t 70 or 75. The late
Angus Fletcher Edin[burgh] corresp[onded] with him.
Angus Macintire & Ken[ne]th Beaton
were taken away from Croic Pheigh[inn].
Paton was put out at Assynt & money
given him to take him home. Macint[ire]
was ?keunpr in France 15 y[ea]rs & came
back to Uist.


Elsewhere Carmichael notes down the physical appearance of the Duke and it is clear from this description that an impression was made which lasted some sixty-six years before being noted down:
Duke [of] Tar[en]t[um] middle sized clear mind[ed]
smart man high sight – Swarthy
complex[ion]. About 5-10 or 5-11.


Perhaps this does not quite chime with his above portrait but it must be remembered that it was painted many years later in faraway France by François Gerard (1770–1837). Only this year – on 30 April 2010 to be precise – a trilingual plaque was unveiled to the memory of the Marshal of France – (Étienne) Jacques (Joseph Alexandre) MacDonald – at Howbeg in South Uist.
References:
CW108, fos. 14r–14v
Hache, Jean-Didier (ed.), The French MacDonald (Port of Ness, Isle of Lewis: The Islands Book Trust, 2007)
Image: Jacques MacDonald, portrait by François Gerard.
at 17:11