Snakes On A Plain

In June 1877, Alexander Carmichael was spending time with Donald MacMhuirich, an Islay crofter, gathering information about birds. Donald was a fund of information on seabirds, shore-birds and land birds, their habitats, breeding seasons and migration patterns. Indeed, from the notes we find in notebook CW89, he was fond of imitating bird calls – ‘Hing hingadale, drig drig hingadale’ says the bru-dearg [robin] – and he was able to give Carmichael the Islay Gaelic names for many birds. However, amidst this wealth of Islay birdlore, he tells a story about his grandfather and snakes. 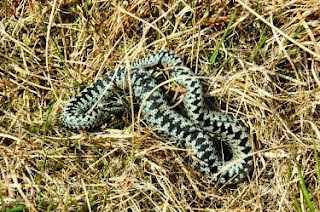 One summer, while away with the milking cows at the sheiling in Bolsa on the north of Islay, Donald’s grandfather noticed that there was something wrong with the milk. He ‘watched and saw a serpent’s trail’ and then ‘saw a serpent coiled on a hillock’*. When the serpent ‘heard some noise she raised her head, he fired two bullets in his gun and killed her’. According to Donald ‘They never saw a [snake] so big as she was 9 ft long.’ Presumably with the snake dead, the milk improved although this is not recorded. Donald then describes how in the last year (1876) seven score snakes had been killed while the year before that, the total had been nearly 180.
I’m not sure I’ve done the story justice as amongst all the ornithological information, it did seem quite dramatic. I had no idea that Islay had so many snakes although if as many were killed every year as Donald said, it’s possible that numbers have declined considerably since then.
References: CW89/23 (folio 7r)
Image: An adder on Jura, taken by Armin Grewe, 2007.
*Technically not a plain but needs must when puns are required. Ed.
at 17:05