A Mysterious Light on Hasgeir: The Teine Mór or Big Fire - Part 1

Following on from our last newspaper column blog, we’re going to print two very different pieces from the Inverness Courier, about the same strange phenomenon: a mysterious light seen on the rocky islet of Hasgeir, eight miles into the Atlantic off the west coast of North Uist. We then hope to print a few accounts of the intriguing teine mór: if you don’t know the story of the ‘big fire’ yet, we can promise that it’ll be worth the wait!
Although the event the articles describe apparently took place some time in October 1867, both of them were printed in the same edition of the Courier, on 14 November. The first one – the more straightforward account – was reprinted in the Dundee Advertiser two days later, while the second was partially copied by the Elgin Courier the next day. To begin with, here’s the first article as it appeared on page 5:
North Uist. – A Mysterious Light. – A light having been seen for several successive nights on the rocks of Hasker, the general opinion prevailing was that a ship’s crew had been cast away there and had lost their boat. The circumstance of a number of fresh deals [planks of fir or pine] being washed ashore on the beach opposite to those rocks increased the current belief to such a degree that a boat should be sent to rescue any lives that might be there. Alexander Mann, and five other fishermen, volunteered to make the attempt. They started from the Bay of Hoglan [Bàgh Hogha Glan, beside Taigh a’ Ghearraidh], and succeeded in landing on the rock. These rocks are difficult of access even in summer, but no trace of any landing on the rocks or of any people having been there lately, was found. Whether the light was an unusual star, or the reflection from the lighthouse on the rocks in Hasker, is not known. The Rev. John. A. Macrae, minister of North Uist; Dr Macdonald, J.P.; and Capt. Macrae, J.P.; have recommended, by a memorial to the Board of Trade, that these hardy fishermen should be rewarded for the risk of their voluntary efforts in proceeding to the rocks, as the service occupied several days, and was performed at great risk. Mr K. Groom of Stornoway, receiver of wrecks for the Long Island, has forwarded the memorial to the proper quarter, after strongly recommending that the prayer of the memorial may be granted.
The boat crew were given a reward for the dangers they underwent: five pounds, ‘to be divided amongst them’, out of the Mercantile Marine Fund. Local genealogists might be interested in their names: according to information in the RCAHMS Canmore site, as well as Alexander Mann there were Roderick Macaulay, A. McLellan, L. McLellan, J. McDouglas, and A. McIsaac. We would be very interested to hear more about them.
In our next blog, we’ll print the second, much longer article that appeared in the Inverness Courier. Although it deals with the same event, it’s rather more colourful...

Highland Newspapers online - and an obituary of Father James MacGregor 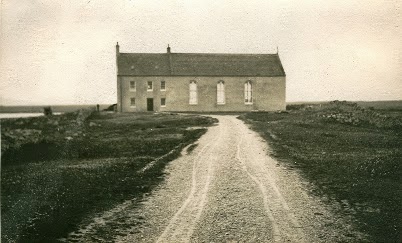 It’s been a long time coming, but a new age is slowly dawning for Highland history. At long last, Highland newspapers are being digitised and put online – for a price! So far, the British Newspaper Archive has made available a complete run of the Inverness Courier up until the end of the 1860s, and just a single year, 1879, of the Oban Times. When all newspapers from the Highlands (and further afield) are finally digitised and accessible on computer, it will revolutionise our understanding of the history of the region, allowing us to search and browse not only the news being reported in their pages, but also all the fascinating columns, letters, lore, poetry, song, and advertisements they contain: all this without having to travel to libraries and wade through fiddly, noisy, eye-aching reels of microfilm.

There are, of course, problems. Firstly, Optical Character Recognition is still not good enough to allow accurate and comprehensive searches of what we’re looking for: over and over again coarse, irregular newspaper fonts and smudged ink (to say nothing of curled page edges or poor digitised images!) play havoc with our investigations. We can never be sure that we haven’t missed that crucial piece of evidence: in the end, hit-and-miss searches are still no substitute for comprehensive, methodical, page-by-page trawls. When it comes to searching for Gaelic words, of course, these problems multiply exponentially – though, as the language has historically used Roman letters, Scottish Gaelic is not so unsearchable as its Irish cousin (at present, though this may well change).
A more serious problem, one maybe needing to be addressed as soon as possible, relates to different editions of single newspapers. Newspaper runs, of course, have always been altered and adjusted as fresh news comes in during the evening and the night. Again, newspapers have printed and continue to print different editions for different areas. There is no such thing, then, as an official, canonical, single specific issue of, for instance, the Inverness Courier or the Oban Times for a particular day.
A major problem for us in the Highlands is that different newspaper editions might offer local news, local columnists, or local occasional literature (particularly material in Gaelic) that might not have been printed in the ‘main’ edition. As we might expect, such local editions have a particularly low survival rate, and it would be rather catastrophic if old numbers from these runs were to end up in a skip because the main edition of the newspaper was now ostensibly ‘safely online’. In the future we shall still have to consult hard paper copies (no matter how fragile), trawl through microfilms (no matter how exasperating), or browse newspaper cuttings-books (of which we have a plethora, from several different owners, in the Carmichael Watson Project).
Over the next few blogs we’ll print some Carmichael-related material (and maybe some non-Carmichael-related material too) culled from newspapers in the Highlands and beyond. Here, to begin with, is an obituary for Father James MacGregor, Roman Catholic priest at Ardkenneth, an t-Ìochdar, South Uist. The piece was printed in the Inverness Courier for 25 April 1867. Maighstir Seumas had died some time previously, on 15 February, of what appears to have been a painful kidney infection.
Obituaries are fascinating in what they tell us of how contemporaries viewed the deceased, and the little glimpses and hints they give into personalities. As a search for his name in the Carmichael Watson Project, the Calum Maclean Project, or Tobar an Dualchais  demonstrates, Father James MacGregor remained well-known in tradition for well over a century after his death, not just as a local character, but also for his reputation as a healer, occasionally employing somewhat unorthodox methods.
Notes from Uist.

A correspondent in the Long Island writes as follows: –
‘Two persons have lately died in this quarter who will be much missed – the Rev. Jas. Macgrigor, Roman Catholic priest, South Uist, and Mrs Macdonald, Scolpaig, North Uist. Both died at the age of seventy-seven. Mr Macgrigor was a native of the interior of Perthshire. He studied at the Roman Catholic College of Lismore, Argyllshire, before that seminary was removed to Blair, Aberdeenshire. After leaving Lismore he was appointed to the mission station of Lochaber, where he remained for ten years. Thence he was transferred to Iocar, South Uist, where he laboured for the long period of thirty-nine years. Mr Macgrigor was a man of humour and cheerfulness, and endowed with much sound common sense. He was tolerant towards all, and lived in peace and charity with all men. It was be safely affirmed of him that he was equally beloved and respected by all classes and all denominations. He had a good knowledge of medicine, and the people had great confidence in his skill. Like the noble Fingal of old, of whose son’s poems he was fond to the last, his door was never closed. His greatest delight was to see people at his house, and as far as in his power to administer to their comfort and happiness. If Mr Macgrigor had a predominant weakness, it was land-improving and iron gates. He had tons of iron rails and iron gates about him. On the short approach leading to his house at Aird-Choinnich he had no fewer than three or four ponderous iron gates, each more complex than the other in its construction and fastenings. This, upon one occasion, led to a witty remark from the late Bishop Murdoch, of Glasgow, himself a man of much humour. Upon his coming to Aird-Choinnich on one occasion rather unexpectedly, and experiencing some difficulty in getting through the gates, he remarked that ‘if Father Macgrigor guarded the way to heaven as effectually as that to his house, it would be no easy task effecting an entrance.’ Mr Macgrigor was a man of great integrity, and at heart a thorough gentleman. With the exception, perhaps, of the funeral of the late greatly-beloved and regretted Dr Maclean, of Milton, so large a concourse of people as that which attended Mr Macgrigor’s funeral has not been seen in this quarter for many a day. Protestant widows were there, equally demonstrative in their grief as their Roman Catholic sisters; and Protestant ministers were there, who united with Roman Catholic priests in saying that they had all lost a friend whose equal they were not likely soon to see again. – Mrs Macdonald, Scolpaig, was a native of Skye. She was a lady of a fine presence and personal appearance, and of much culture and intelligence. Although none could escape feeling that he was in the presence of a lady of superior attainments, her unassuming modesty prevented her revealing the rich stores of her mind to any but her intimate friends. Mrs Macdonald was highly respected by all, and greatly beloved by the poor.’