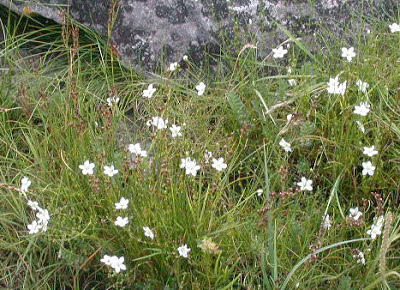 There are numerous accounts of plant lore noted in Carmina Gadelica and within the notebooks at the Centre for Research Collections, and a previous blog highlighted some of the key plants for popular herbal remedies. This blog notes some uses for am mothan / pearlwort including a method for securing a spouse!

The 'mothan' (bog violet?) is one of the most prized plants in the occult science of the people. It is used in promoting and conserving the happiness of the people, in securing love, in ensuring life, in bringing good, and in warding away evil.

When the 'mothan' is used as a love-philtre, the woman who gives it goes upon her left knee and plucks nine roots of the plant and knots them together, forming them into a 'cuach' - ring. The woman places the ring in the mouth of the girl for whom it is made, in the name of the King of the sun, and of the moon, and of the starts, and in name of the Holy Three. When the girl meets her lover or a man whom she loves and whose love she desires to secure, she puts the ring in her mouth. And should the man kiss the girl while the 'mothan' is in her mouth he becomes henceforth her bondsman, bound to her everlastingly in cords infinitely finer than the gossamer net of the spider, and infinitely stronger than the adamant chain of the giant.

The 'mothan' is placed under parturient women to ensure delivery, and it is carried by wayfarers to safeguard them on journeys. It is sewn by women in their bodice, and by men in their vest under the left arm.
An old woman in Benbecula said: - 'thug mi am mothan beannaichte do Ruaraidh ruadh mac Roaghail Leothasaich as a Cheann-a-deas agus e air a thuras do Loch-nam-madadh, dol ga fhiachain air bialabh an t-siorram agus fhuair e dheth ge do bha e co ciontach 's a chionta ri mac peachaich' - 'I gave the blessed 'mothan' to red Roderick son of Ranald of Lewis from the South-end (of Uist), and he on his journey to Lochmaddy to be tried before the sheriff, and he got off although he was as guilty of the guilt as the son of a sinner.'  'Ach a Chairistine carson a thug sibh am mothan dh'an duine agus fios agaibh gun robh e ciontach? Saoilidh mi fein nach robh e ceart dhuibh a dhol ga dheanamh' - 'But, Christina, why did you give the 'mothan' to the man when you knew that he was guilty? I think myself it was not right of you to go and do it!'  'O bhidh 's aodaich! a ghraidhean mo chridhe agus a ghaoilean mo dhaoine, cha b' urra dhomh fhein dhol ga dhiultadh. Bhoinich e orm, agus bhochain e orm, agus bhoidich e orm, agus chuir e rud am laimh, agus O! a Righ na gile 's na greine, agus nan corracha ceuta, curra, de b' urra dhomh ghein a gh' radh no dheanamh agus an duine dona na dhubh-eigin na dhear-theinn agus na chruaidh-chas' - 'O food and clothing! thou dear one of my heart, and thou loved one of my people, I could not myself go and refuse him. He beseeched to me, and he swelled to me, and he vowed to me, and he placed a thing in my hand, and oh! King of the moon, and of the sun, and of the beautiful, sublime stars, what could I myself say or do, and the bad man in his black trouble, in his red difficulty, and in his hard plight!' I remembered Bacon and was silent.

To drink the milk of an animal that ate the 'mothan; ensures immunity from harm. If a man makes a miraculous escape it is said of him. 'Dh' ol e bainne na bo ba a dh' ith am motha ' - 'He drank the milk of the guileless cow that ate the "mothan"'.

Laomachan. 'Little mouldy one', was a rind of cheese used for divination. The cheese must be made on one of the four old festivals of the year: Bealltain, Beltane; Lùnasd, Lùnasdal or Lùnasdain, Lammas; Samhain, Hallowtide; and Fèille Brighde, the Feast of Brigit; but on which of these is now uncertain. The milk used was that of a cow which had eaten the mòthan, pearlwort, for since the plant was sained the cheese was sained also. twelve months after the cheese was made it was used. A small hole was made through the rind, and through this the diviner looked down through the fàrlas, smoke-vent of the house. The name of the first person thus seen through these two orifices was the name of the future spouse. When the loamachan was placed under the pillow, the sleeper would in dreams see his future spouse coming towards him with gifts; were the person seen receding, it indicated a parting. the laomachan safeguarded its wearer from the wiles of the fairies of the mound, from the venom of the hosts of the air, and from the misleading light of the teine mòr or teine sionn, will o' the wisp. For naming, for dreaming and for safeguarding, the laomachan was effective only on the anniversary of the fesitval on which it was made, and only to those who had faith and sincerity of heart; only to those who bowed to them were the names true. Many curious rites and ceremonies connected with the laomachan and its use are now but dimly to be descried through the darkness of ages.

Beltane is an important day in the Celtic calendar that marks the beginning of summer, and the day is still widely celebrated. Fire was, and is, used as a method of purification and the various practices were outlined in previous May day blog entries (anseo agus anseo).

In Carmina Gadelica there is a note about quarter cakes, bannocks that were smaller than the St Michael's strùan, but it is apparent that the tradition was no longer widespread in the late 19th century.

In a contribution to Folklore 1895 is a note about Beltane bannocks, and variations on the tradition are noticeable. One description reads as follows:


Bannocks were baked the evening before Beltane, the first day of May (O.S.), and were called Beltane bannocks. They were made of oatmeal in the usual way, but they were washed over or "watered" with a thin batter composed of whipped egg, milk or cream, and a little oatmeal. Before being laid on the "brannithr" (Keith), "branner" (other districts), :ie. gridiron, the upper side was rubbed over with this batter. When the underside was sufficiently baked or "fired," the bannock was turned, and the underside was now rubbed over with the batter. The bannock was then allowed to hang over the fire on the gridiron till fully baked.

On Beltane about mid-day the young folks, each with a bannock, went to the rocks or high grounds, and rolled them down. If a bannock broke in the rolling, the one to whom it belonged would come to some disaster or die before next Beltane. They ate them, but left a "bittie" to the "cuack" or cuckoo. They carried a piece home, and placed it under the pillow in the sweetheart's name, to find out if dreams would reveal the future as to marriage. Eggs were not used in baking the Baptismal and Christmas bannocks.


At Achterneed, near Strathpeffer, Ross-shire, on the first day of May the children received each an egg and a cake. With these they went to the hill, as many at times as twenty and thirty in company. They gathered material, formed a bonfire, and roasted the eggs in the ashes. Before placing the egg in the ashes, each child put a mark on it so as to be able to identify it when taken from the ashes. The egg and the cake were eaten. The cake was baked between nine and ten o'clock in the morning. It was kneaded entirely in the hand, and not on a board or table like common cakes. It was "fired" or baked in front of the peat fire on the hearth supported by a stone. After being so baked it was put into the child's hand, and not on any table or dish. It must never be put from the hand except to be baked in front of the fire. If laid on anything it was then nothing more than an ordinary bannock. It was called "tcharnican" (spelt phonetically), because it was made wholly in the hand. The word means " hand-cake." Those now sent were baked by a native of the parish of Fodderty, who is now eighty-three years of age. One of them was baked in my presence.

Carmichael also notes that traditionally Thursday was considered a lucky day for all enterprises except when Beltane fell on a Thursday:

When the Wednesday is Hallowmas
Restless are the men of the universe;
But woe the mother of the foolish son
When Thursday is the Beltane.