Ruairidh an Rùma enjoys a good old cup of tea 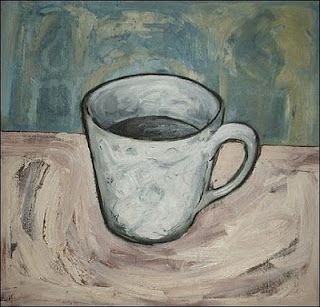 Hector Maclean (1818–1893), the Islay schoolteacher then collecting in the Outer Hebrides for his friend and youthful companion, the Victorian polymath that was John Francis Campbell of Islay (1821–1885), wrote him a letter from Castlebay, Barra, on the 30 September 1860. In this fascinating account Maclean describes his recent expedition that had taken him to Mingulay and, most importantly, his meeting with Roderick MacNeil (c. 1790–1875), Ruairidh mac Dhòmhnaill, better known perhaps under his moniker Ruairidh an Rùma ‘from his having found at some time 3 hogsheads of rum on the shore’:
I was over at Minglay last week and saw Roderick McNeill who is so celebrated among the people here as a story teller. I have written several of his tales which appear to me to be remarkable for vivid and pointed dialogue. He is an animated and spirited old man and though crippled to a certain extent by rheumatism his vivacity is not the least damped and the vigorous activity of his mind is not the least impaired 74 and not a trace of dotage. He hobbles about bareheaded and barefooted and is said not to have worn shoes for the last fifty years. He tells his tales with extraordinary effect being a capital natural elocutionist using pause emphasis gesture and inflection of the voice to express passion sentiment and character fully as well as though he had been trained by some of the best actors of the day. His Gaelic is excellent but his style is of the plain simple kind. He has obviously an aversion to anything obscure or mystical and gives a clearness and reality to the greatest extravagance […] He has many tales borrowed from other sources than Highland but he gives them all a Highland form.
Some seven years later on 8 August 1867, Alexander Carmichael also met this famed tradition bearer – although he seems to have aged considerably during the intervening years – and notes down an amusing anecdote about him:
Ruary an Ruma. Strange. The school
servant gave him a cup of tea. He de
clared that once and but once only
did he ever taste tea before. Is there
another man of 88 in Britain who can
say the same? I asked him how did
he like the tea. M anamsa Dhia gu
bheil gle mhath. Ach bu cho mhath
liom an siucar eir uisge teth ris
a so! Nach bu mhath luidh mhic
Righ B[h]reitean seach an seo? Amen.


Although tea was perhaps not so much of a luxury item as it had once been in the Highlands and Islands it appears that it was still relatively scarce in Mingulay. On the other hand perhaps Ruairidh an Rùma may have preferred a tipple of the drink from which he earned his nickname rather than a good old cup of tea.
References:
NLS Adv. MS 50.2.1. fo. 226
CW MS 114, fo. 77r
Image: Cup of tea
at 15:27