Sometimes we get things wrong. The rectangle pictured here, from fo.15 of notebook CW111 and referring to a site in the Isle of Barra, looked like any number of archaeological sketches Alexander Carmichael was compiling at the time. The accompanying words should have given us a clue:

The drawing is surely none other than a sketch of Clach Mhór nan Gleann (or Clach Mhór nan Gleannan) itself, a monstrous glacial erratic with a nice big overhang, five hundred yards up the north-east slopes of Beinn Eireabhal, just above the road at the south end of the Tràigh Mhór.

How did the Big Rock of the Glens come to be there in the first place? Carmichael explains it all in another notebook:

Clach mhor nan Glean[n]an was thrown by a L[och]lan[n]ach [Viking] fr[om] Fuidey on his at his sweetheart who was aft[er] a buidein sheep. The stone struck her & drove her into the ground. Boulder stuck in the earth. Large. He didn’t wish to kill her but just threw this as a spitheag [pebble] at her. [CW90/105]

This piece of information was recorded on 24 September 1872 at a céilidh in Ceann Tangabhal, Barra, with two of Carmichael’s favourite informants there, John Pearson (1814–85), Iain Peusan, and his sister Catrìona (c. 1807–80). As described in an earlier blog, in island tradition the island of Fuideigh is particularly connected with the Vikings, and is supposed to have been their last redoubt from the MacNeils. We don’t know yet what a ‘buidein sheep’ might be – any ideas from Barraich gratefully received!

At another céilidh a couple of nights later Carmichael records another rather gnomic reference:

The remains of the Vikings killed by the MacNeils in Fuideigh ‘are turned up now & again’ [CW90/107], including:

One skull as large as a pot of 2 gal[lons] bones as large in pro[portion]. At first you would think it was a human skull. This was found in Fuidey. Others ordinary size. [CW90/154]

Today Clach Mhór nan Gleannan has not been forgotten: we see that it’s been noted as a good site for Barra bouldering! We recommend comparing Carmichael's rough sketch with the excellent pictures in Adi Gill's flickr stream. Did Carmichael himself climb it to make his measurements for the field notebook sketch?

As for the chapel site we originally thought Carmichael was describing in his sketch, Caibeal Chrois É – well, we’ll leave that for another blog.

The team had an extremely busy week last week with Domhnall Uilleam in London, Kirsty in London and Guinevere in Dublin and Galway. This blog entry is a roundup of everyone's activities:

On Friday Domhnall Uilleam spent a very enjoyable day (as ever!) at the National Archives in Kew getting his fingers thoroughly filthy looking at old leather-bound War Office records. The mission: to see if there was any evidence in the army deserter lists concerning John MacPherson or Pearson (1814–85), Ceann Tangabhal, Barra. Known in island tradition as Iain Peusan, MacPherson and his sister Catrìona were two of Carmichael’s favourite informants. Local history relates that in his youth he had joined the army and had to be ‘sprung’ from the regimental barracks by his cunning sister. The authorities followed MacPherson back to Barra where, helped by a tracker dog, they gave chase. Just giving them the slip, MacPherson holed up in a cave on the slopes of Beinn Tangabhal for six weeks. The authorities supposedly gave up the pursuit on hearing from Catrìona that her brother had drowned while running away. One version has it that, just to make sure, MacPherson converted to Protestantism, thus allowing his friends to say, ‘Chaochail e ’bheatha’: either ‘he changed life’ or ‘he died’.


Unfortunately, no immediately obvious John MacPherson, or John Pearson for that matter, appears in the Highland regiment deserter lists. One of the names is recorded as enlisting with a friend in the 74th Foot at Kilmarnock on 26 December 1829; they both absconded the same day. Another John MacPherson, from the 93rd, deserted in July of that year, but was apprehended at Appleby in Westmorland, probably on his way back north, and was sent back to the regimental depot, then at Stockport. The information on these lists is, it has to be said, incomplete; on the other hand, Iain Peusan could have enlisted under another name (he was purportedly taking another man’s place); or it could just have been a good story.

Domhnall Uilleam then spent the weekend at the Popular Antiquities: Folklore & Archaeology conference at the Institute of Archaeology at University College London. His paper explored Carmichael’s engagement with the hydrographer and antiquarian Captain F. W. L. Thomas, how correspondence with the latter inspired him to begin a programme of archaeological surveying throughout the southern Outer Hebrides, especially of the island brochs which Thomas was investigating at the time. Unfortunately, the sheer size and difficulty of the task, and Carmichael’s lack of surveying skills, meant that in most cases he was unable to go much further than collecting basic information, and associated historical anecdotes and legends, from his informants.

As with the previous Popular Antiquities, the conference was lively, thought-provoking, and extremely enjoyable, with papers spanning the world from the Orkneys and the Borders to Kashmir and China. One highlight was learning that the very common motif in Highland folklore of a dog being sent into a mysterious cave and coming out miles away at the other end without its fur is told in Hampshire of a duck, which at last emerges at the cave exit without its feathers. Anyway, there is a feeling that at last folklorists and archaeologists can come together and acknowledge their shared antiquarian roots! Our thanks to the organisers Martin Locker and Tina Paphitis of UCL, and Caroline Oates of the Folklore Society.

Kirsty was in London for an archives meeting and used the opportunity to go and visit The Fan Museum in Greenwich, the only museum of its kind in the world. Still hot on the heels of information about Flora MacDonald's fan the hope was that the museum or its curator could add a bit more knowledge to what we already know.


The museum has a pleasing and informative display on fan making and different types of fans from around the world. It is currently exhibiting a selection of fine, mainly ivory and paper, English fans. In the 18th century, the English became so adept at making exquisite and ornate fans that they were exported to France, which at the time was the home of quality fan-making.

Fortunately, the owner, Mrs Hélène Alexander, was in the museum, so Kirsty was able to show her a picture of the fan and ask some questions. She said that the fan might have been made in England, France or even Poland but its date, which fits in with it as having been given by Lady Primrose to Flora MacDonald, means that there would be no fan-maker's name on it, so we're unlikely to be able to trace it more precisely.

Interestingly, when a fan such as this one has three vignettes, it is quite common for the left and right hand side ones to have no connection to the central one, so the parents and child theory may well be bogus! Mrs Alexander was also of the opinion that the fan was fairly ordinary although clearly it is its association with Flora MacDonald and Lady Primrose which makes it special.

It was slightly disappointing not to be able to get more detail about Flora MacDonald's fan but it was reassuring to have what we do know confirmed.

Guinevere spent a few days over in Dublin and was at the National Archives of Ireland to investigate Duncan Cameron's wife's family. Mary Leonard is noted in the Scottish censuses as being from Westport, County Mayo and her father, Leonard, worked with the Inland Revenue.

The afternoons were spent in the Irish Folklore Archive at University College Dublin. The archivist, Criostóir Mac Carthaigh, was extremely helpful and mentioned some good references that will be investigated, especially about people collecting objects for the Ard-Mhúsaem. She was researching the lore collected from Tory, an island off the coast of Donegal and had a quick look at some references to the Highlanders after 1798.

The next port-of-call was the National University of Ireland, Galway to attend the Comhdháil Roinn na Gaeilge, a two-day conference on Irish culture and literature organised by the Department of Irish. There was an impressive program in place with some great guest speakers from all over Ireland, and a paper about Seán Ó Suilleabháin and Seamus Ó Duilearga from the Irish Folklore Commission was of particular interest to Guinevere. It was exciting to be involved in the conference, go raibh maith agaibh Lillis agus John.

Phew, what a week!

﻿
﻿Flint arrowheads can be dated to the Neolithic and Bronze Ages and were used very commonly throughout Britain and Ireland. The flint was shaped by knapping and pressure-flaking, both processes involve reducing the flint by striking the stone. The knapping would reduce the flint to the desired size and pressure-flaking would achieve the desired shape and refine the projectile point of the flint. A number of the examples in these photos are barbed and tanged making them easier to attach to a shaft.

As well as their practical use, flint arrowheads were heavily associated with the fairies in Scotland and were called saighead shìth. It was commonly believed that these weapons were thrown at cattle and humans by the fairies in an effort to capture them. Any person or animal that was taken ill suddenly was thought to have been shot at and replaced with a changeling. 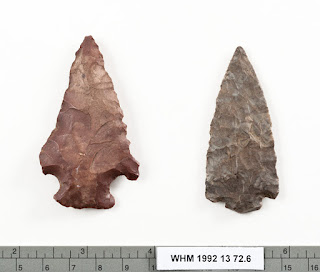 The flints were also used as protection against the fairies but, similarly to the St John's Wort Achlasan Chaluim Chille, they could only be found accidentally. Carmichael was informed that the fairies were always eager to get their arrowheads back and provides an account of his own experience in Carmina Gadelica ii:

The people say that a fairy arrow, especially the arrow of the fairy queen, cannot be safeguarded against the wiles of the fairies. The writer can confirm this in his own experience, having unaccountably lost, despite all possible care, the smallest and most beautifull shaped and coloured arrow-head he has ever seen, and that within a few hours after getting it!

As well as being used as protection, the flints were used in cures. Water in which the arrowheads were dipped would be given to a cow to remedy being shot at. Alternatively the water would be used to wash the wound inflicted or the stone itself was rubbed on the area. 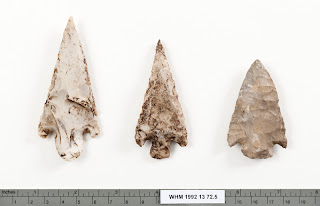 The Carmichael Collection housed at the West Highland Museum has 18 flint arrowheads of various shapes, sizes and colours. ﻿If you happen to be in Fort William do visit the Museum, it's worth it!