A Mysterious Light on Hasgeir: The Teine Mór or Big Fire - Part 2 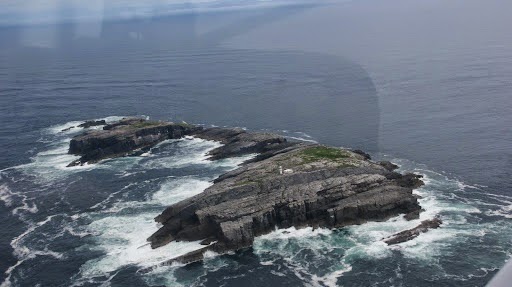 We’ve promised you another article about the ‘mysterious light’ seen on the rocky islet of Hasgeir off North Uist in October 1867. Here it is, as printed in the Inverness Courier, 14 November 1867, on the page directly following the article printed in our last blog. As you can see, it’s quite a length, but we think that, despite the generously upholstered Victorian prose style, it’s so fascinating, taking in everything from gory and, for us today, rather upsetting details concerning local seal-hunting to the intriguing teine mór or big fire, that it’s worth quoting in full.

The Mysterious Light at Hasker –
A Legend Revived.

We have mentioned elsewhere in a paragraph from North Uist that a wreck was supposed to have taken place on the rocky island of Hasker, as a light was seen on one of the headlands. A correspondent refers at greater length to the subject in the following communication: –

‘North Uist, Oct. 26, 1867. – The weather must have been bad enough at Nether-Lochaber last fortnight when it suggested to your correspondent in that quarter the woeful picture of Lear and his slender retinue on that fearful night, which ‘pitied neither wise men nor fools,’ when his unnatural daughter turned him away from her door. Here, also, the rains and storms have been foul and furious. Had we never heard of Old Lear, the elements are often fierce enough to draw largely on our fears and sympathies.

‘In a former communication I had occasion to mention that on our western shores the water is shallow and dotted over with rocks and shoals. A reference to a chart of these parts, however, will show that the coast of North Uist presents a more formidable array of rocks and rocky islands than any other point of the whole Long Island.

First, there is Monach Island, where a lighthouse has been lately erected, and which has been the scene of many a painful spectacle – where many a noble ship and gallant sailor finished their career for ever. Then, there is St Kilda, which, though standing thirty-five miles out to sea, may still be considered merely as a spur or continuation of the inner rocks; and nearly in a line with St Kilda, and some twelve miles from land, there is another huge rock, or rather a range of rocks, rising sheer up from a great depth to a height of upwards of two hundred feet above the watermark, and forming, as it were, a rampart or outpost for the protection of the throng of low-lying rocks in its rear, and which in its presence hide their diminished heads.

This rock, which is called Hasker, is irregular in shape: three sides present an unbroken line of steep precipitous cliffs, which utterly defy any attempt to scale them even in the finest weather. On one side, however, there is a ledge, where landing can be effected under favourable circumstances. Hasker is the resort of innumerable seals and sea-birds.

Thither, till of late years, the natives of this island have been in the habit of repairing occasionally to shoot, and, apart from its profitable aspect, this was considered a bit of adventure, and a good deal of preparation, excitement, and rivalry where displayed on such occasions. As a rule, the best boats, the fairest weather, and the stoutest men in nerve and limb were selected. They usually arrived at the rock about midnight, and having gone through some preliminary arrangements, inter alia, that of substituting for their boots several pairs of stockings to protect their feet from the mussels, with which every stone is incrusted, they commenced their march noiselessly, in perfect order, and armed with huge clubs, in quest of their intended victims.

About half-way up the rock is a broad, shallow pool, which, under the friendly shelter of tall, overhanging cliffs, and surrounded with smooth ledges, might well have figured in Homer as a favourite resort of Nereids, but which more probably has served the seals as sleeping berths for countless ages. To this spot the storming party bend their steps. The poor unsuspecting seals, roused by this unexpected intrusion, only succeed in getting into the grandest confusion in their frantic efforts to find their way to the sea.

Finding themselves hemmed in on all sides, the instinct of self-preservation inspires them in many instances with sufficient courage to face their assailants. Meanwhile, the wholesale slaughter goes on mercilessly, and, according to all accounts, it requires a firm footing, a steady nerve, and considerable dexterity in wielding the club to hit the grinning monster at the right moment and on the most vulnerable point. But I digress; I will now turn to the weather once more.

‘One night last week some keen-sighted persons observed a light at Hasker, as they thought, and next day, with the help of a spying-glass, sure enough three or four men were seen stalking about on the loftiest ridge of the rock. The report spread with electric speed and produced the greatest sensation throughout the country. Many were the manifestations of sympathy and the expressions of anxiety lest the poor castaways should succumb to want and exposure before they could be rescued. But, to support hope, like Whang the miller’s dream, the light was seen again in the same spot for several consecutive nights, though there were, indeed, a few obstinate persons who, from some defect or other in their visual faculties, could not manage to see it at all.

The westerly gales which had continued to blow all this time with provoking pertinacity at last calmed down, when several boats set out, amply provided with food and clothing, for the forlorn outcasts. After struggling long and bravely with the Atlantic billows, the party at length arrived at their destination; but what was their disappointment and surprise at discovering no trace of human beings. The question, of course, naturally arose – how to account for the light! Some gently hinted that possibly there was no light, or, if there was, that it may have been more imaginary than real. Others, not much disposed to be sceptical in such a plain case, scouted this heresy, and accounted for it on more reasonable grounds. But the true solution was reserved to a conclave of wise matrons, who declared in the most decided terms that it was the Teine mòr – big fire – and nothing else.

‘The history of this singular phenomenon is curious, and as it does not exactly partake of the same character with the other legends and traditional lore of this part of the country, inasmuch as its first appearance, which was connected with a mysterious and rather extraordinary occurrence, is of comparatively recent date, perhaps it may not be much out of place to give a brief account of it.

A narrow strip of land immediately bordering on the west sea-coast consists entirely of sand-banks which abound in madder root. This root was largely used by our great-grandmothers as a dye stuff; but as the holes and burrows formed in digging for it helped materially to perpetuate the non-cultivation of the land, it was in due season prohibited under heavy penalties. As might be expected, the more refractory of these worthy dames did not submit to this curtailment of their liberty with a good grace; but as they could get madder root no more by fair means, they did not scruple to take it under the friendly shades of night.

It was in the island of Benbecula, some fifty years ago, one Sunday night, that a young woman went to dig this root, despite the warm remonstrances of her mother, who, the story says, cursed her daughter as being always a perverse stubborn creature. This young woman was never seen again. A few traces of her, however, were discovered, such as some loose articles of clothing and stray bits of the roots she had been digging, which were found, not in one place, but marking out a line, in the direction of the sea-beach. Not the faintest footprints could be seen along this track, but scratches were observed in the sand, as if a person were dragged along rapidly, and at the same time held aloft, but not so high but that his toes at intervals came in contact with the surface.

It was on the night following this tragic occurrence that the Teine mòr, or, as it was styled in English, Spunkie, put in its first appearance. The mystery was now cleared up to the satisfaction of all sensible persons. It was evident that the adversary of mankind had danced away with the ill-fated woman, and that her spirit was condemned to wander, in this shape visible to mortal eyes, around the scenes of her former misdoings, both as a punishment to herself and a warning to all young women to abstain in future from madder root digging on Sunday nights, and from incurring the curses of their mothers. No wonder, then, that this phenomenon should at all times inspire an uncommon amount of superstitious awe and terror.

At first it confined itself for several years to Benbecula, roving about dark lakes, marshes, and arms of the sea, a fit representative of the disconsolate shades wandering on the slimy banks of the Styx, vainly craving a passage of grim old Charon till the term of their penance had expired. Gaining courage by experience, it subsequently extended its peregrination to the neighbouring islands, and many and various are the stories told of its antics. It often indulged in a mischievous trick of waylaying the wayfarer in the most lonely and out-of-the-way places, such as crossing fords and moors. Of late years, however, it has begun to lose credit and a goodly share of its former terror, on discovering which it made several excursions across the Minch: and the last that was seen of it has been already recorded, when it was enlightening the scarts [cormorants] and seals on the wild rock of Hasker!’

The story of Whang the Miller, from Oliver Goldsmith’s The Citizen of the World, remained a stalwart of the school curriculum through the Victorian era and beyond.

As many readers will know, spunkie is a widespread dialectal word for the Will o’ the Wisp. In the next blog we’ll present some other accounts of the teine mór: how it first came into this world, what it looked like, where it was seen, and the people it haunted.

Image:
Hasgeir from a helicopter (Denise van den Brun)
at 21:55 No comments: