The Tyranny of a Uist Factor 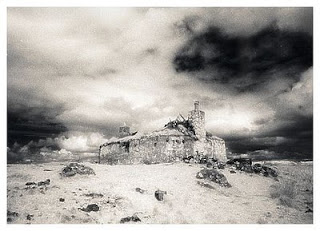 A rather unusual contemporary example collected by Alexander Carmichael from the very person to whom it happened – John MacMillan (fl. 1860–1880) of Daliburgh, South Uist – concerns a factor named William Birnie (c. 1807–1880). It is likely that Birnie hailed from Aberdeenshire and he was but one in a long line of factors in South Uist. During his time as factor he would have been one of the main agents of change at the time Colonel John Gordon of died and his South Uist estate passed to his wife. Colonel John Gordon of had bought South Uist (along with Benbecula, Eriskay and Barra) in 1838 thus ending almost five hundred years of possession by the MacDonalds of Clanranald. This heralded unprecedented change and social turmoil in the Southern Hebrides which saw mass clearances of many islanders who were forced to emigrate to . It is little wonder then that William Birnie is not fondly remembered as he was the very public face of a landlord’s oppression motivated by greed and the pursuit of profit with hardly a second thought for the consequences of the poor people who would be affected by such measures:
John Macmillan skipper Dallabrog
ten[ant] lent £10/ to a neighbour who was to repay
him at the first market in summer.
But not having done so & aft[er] trying for
5 or 6 years to get it he saw the man
before small debt court. On the morning
of the court while skating on the ice in front
of the house a son of John Macmillan
fell & broke his col[l]ar bone &c. This rendered
the fath[er’s] app[earance] in court 10 min[ute]s late & decr[ee]
was bro[ugh]t out against him with £5 more
than he lent the man. The acc[oun]t was made
up no person knew how but without
foundation (The Macleans of Mull
had only Eachann us Eoun The acc[oun]t made
up like this.) John Macmillan showed the
decree to the fiscal & asked him how he cou[l]d
obtain a rehears[al] of the case & place the shoe
maker on oath about this extra acc[oun]t. The
fiscal said the decree was absolutely
worthless & wholly illegal. This came to Birnie’s
ear & when paying the rent he att[acked] Macmillan
& aft[er] damning & calling him everything for showing
his decree to the fiscal daring him to have his
decision reversed by the sheriff or that
he w[ou]ld put him out of his croft. Should you
put me out of Uist & out of the Kingdom
I who know the truth of the case will not
submit to such a dec[ree] till I bring the case
before the sheriff. Mr Birnie rose from
the side of the room walked across it &
struck Macmillan in the cheek in presence
of his clerk ---- ----!