The targe, or target [targaid], is a circular wooden shield that was popular in the 17th and 18th century Highlands. It was held with the left arm and a sword, spear or dagger would be carried in the right hand. The targe's primary use was to fend off blows from oncoming attackers, and often the back side was padded to deaden the impact therefore protecting the arm.

The weapon was constructed from wood boards, typically oak or pine, fastened together and covered with embossed and tooled leather. Brass or nickel studs were added in a circular pattern to the front and a hand grip or two grips were fastened to the back. A common addition was an arm strap to ensure a firm hold on the shield. Occasionally targes were highly ornamented with silver or brass mounts and heraldic representations.

The targe could likewise serve as a weapon as the centre brass boss, generally the larger boss, could accommodate a spike being attached to it. This was surely a contributing factors to its popularity; the defensive and offensive benefit.

The Highland Charge was a military tactic involving the targe that was successful at battles including Killiecrankie and Prestonpans.  It involved the soldiers discharging their muskets at close range and then charging ahead through the smoke with their targe and broadsword. This tactic was last used at Culloden in 1746 but unfortunately the effect was greatly lessened. Major Mackay Scobie maintained that the soldiers discarded their targes due to their inability, through exhaustion, to carry them.

After Culloden the use of targes went into decline, and the 1746 Act of Proscription  (enforced 1 August 1747) banned the weapon along with all other weapons associated with the Highlands: ‘to have in his or their custody, use, or bear, broad sword or target, poignard, whinger, or durk, side pistol, gun, or other warlike weapon’. This same act restrained the wearing of “Highland Garb”, but was repealed over thirty years later in 1782. A famous quote by Boswell, 1773, reads:

There is hardly a target now to be found in the Highlands. After the disarming act they made them serve as covers to their buttermilk barrels.

This example of a targe is from the late 18th to early 19th century and shows no sign of use in combat which could be due to the lack of hand grip or arm strap on the back. It was possibly made to coincide with the visit of King George IV in August 1822. This visit was orchestrated by Walter Scott who encouraged Scots to wear their tartan proudly for the monumental visit, as a British monarch had not been to Scotland since 1651.

The Carmichael collection at the West Highland Museum has a vast range of objects, a number of which have been presented in blog entries over the past months. The full catalogue of objects is due online via the Carmichael Watson Project website at the end of April 2013. 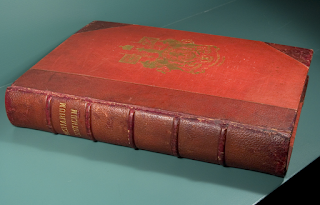 The brothers edited and illustrated the famous Vestiarium Scoticum: from the Manuscript formerly in the Library of Scots College at Douay. With an Introduction and Notes, by John Sobieski Stuart that was published in 1842 by William Tait of Edinburgh. The book lists the clans from all over Scotland: Highlands, Lowlands and the Borders, ‘the order of Terteinis apperteinand unto ye chieff Hieland clannes’ and seventy-five colour plates illustrating the tartans of the clans listed.

This impressive publication was based on an ancient manuscript the brothers possessed that was collated with a second manuscript from the library of the Monastery of St Augustine in Cadiz from 1571. Although in 1828 they displayed a 1721 Vestiarium manuscript to Sir Thomas Dick Lauder, this was not used as a source.

The authority of all these texts was questioned and doubt cast over the brothers' integrity. A popular opinion was that the tartan manufacturers encouraged the publication as the popularity of tartan sky-rocketed from 1842. Either way, be it author or editor/illustrator, these two brothers were behind what Telfer Dunbar believed to be ‘probably the most controversial costume book ever written’.


Carmichael, noted for his extensive collection of folklore, also acquired an extremely significant tartan collection, including a kilt worn by one of the Sobieski brothers. Telfer Dunbar, one of the leading Highland Dress experts, noted:

“Without doubt the greatest collector of early tartans and dress was Alexander Carmichael – compiler of Carmina Gadelica. His fine specimens of pre-nineteenth-century tartans with their lovely colour combinations and interesting weaves are far removed from the “clan” tartans of later times. Without the work of Alexander Carmichael our knowledge of early specimens of tartan would be very slight indeed.”

The tartan collection, unfortunately, no longer exists as one entity. The West Highland Museum has tartan clothing and NMS, Edinburgh holds some the pre-nineteenth century tartan swatches mentioned above but the rest was scattered after Carmichael’s death. Telfer Dunbar attained a number of samples that the team are eagerly trying to locate!
Over the coming months there will be a number of blog entries about this extraordinary facet of Carmichael’s collection. Tartan from the Carmichael Collection is on display in the West Highland Museum that is now open again Mon – Sat, 10 – 4.

For those readers living in Edinburgh there is a long-term exhibition in the National Portrait Gallery 'Blazing with Crimson: Tartan Portraits'.