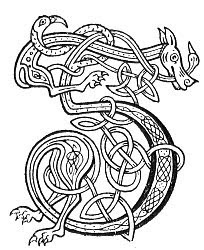 The Rev. Donald MacNicol (1735–1802), then a minister of Lismore in Argyll, is probably best remembered today for his Remarks on Dr. Samuel Johnson’s Journey to the Hebrides (1779), a work which totally dismantled the rather insulting and misinformed comments made by Johnson on the so-called poverty of Gaelic culture in his well-known travelogue A Journey to the Western Islands of Scotland (1775). This minister was the son of Nicol MacNicol, tacksman of Socach, Argyll, and the nephew of Alexander Stewart of Invernahyle. Perhaps less well known is that the good minister around 1766 wrote down around twenty-six songs (and possibly more) from the dictation of Duncan Bàn Macintyre himself for the first edition of his works that appeared in 1768. As Alexander Carmichael relates in this short passage extracted from a rather long lecture, entitled The Bards and Bardism of the Highlands, that he was preparing while resident in Cornwall and which he later wrote out, the minister throughout his life garnered a great deal of Gaelic MSS. These he bequeathed to his son who valued them so highly that they travelled everywhere with him which led to their loss. Those that were not lost at sea – surely one of the greatest losses to befall any collection of Gaelic manuscripts – made their way to the National Library of Scotland in Edinburgh which still has the most outstanding collection of Scottish Gaelic manuscripts (not to mention rare books) to this day.
The Rev Mr Mac Nicol Liosmore who so power

fully annihilated many of the exaggeration
and extortions advanced by Dr Johnson
collected a great many Gaelic M.S.S.

and M.S.S treating of Gaelic matters.
One of his sons Captain [words missing] Mac Nicol
of the [words missing] Reg[imen]t added largely to his fathers
collection. These he so highly valued that
wherever he went he brought them with
him. Unfortunately his very care over
them proved their ultimate loss. In landing
at [words missing] in the W[est] Indies from the
transport ship the boat in which he and his
brother officers were was capsized in the surf
and all the luggage was immediately carried
away by the strong tide while the officers were
barely rescued from a water grave. Among
many valuables lost was Captains
MacNicols large portmanteau of
Gaelic M.S.S. His sister Mrs Cameron
told me that she often afterwards heard her brother
bitterly lament the irreparable loss of the
M.S.S. that although he lost
every thing also he had in the world he re-
garded the loss as nothing compared
with the loss of the M.S.S.