Hebridean Hymns and Popular Lore – I 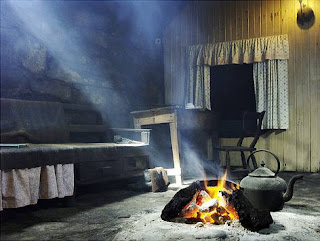 Perhaps in order to appeal to a wider readership, Alexander Carmchael took the opporunity to have his paper on ‘Hebridean Hymns and Popular Lore’ reprinted in the Inverness-based newspaper The Northern Chronicle. Some two years previously Carmichael had, at the bequest of the influential Lord Napier, put together a report entitled ‘Grazing and Agrestic Customs of the Outer Hebrides’ in the Report of the Commissioners of Inquiry into the Condition of the Crofters and Cottars in the Highlands and Islands of Scotland (Parliamentary Papers, xxxiii–xxxvi, 1884), pp. 451–82. It appears that Carmichael’s contribution to this official government report had met with commendation and so it is likely that such encouraging signs gave him scope to publish his material at a more popular level. The example given here is smooring the hearth fire which basically means making the hearth safe for the night – and presumably preventing house fires. Judging from several prayers associated with it in Carmina Gadelica, there was a ritual of protection associated with it. In the modern context we may extend it, symbolically, to blessing and protecting the home before retiring for the night.


URNAIGH SMALAIDH TEINE―PRAYER OR “SMOORING” THE FIRE.
The following beautiful little prayer is said by the women in South Uist while putting up their fire for the night. And the people believe that those mentioned in the prayer do watch over themselves and their households and shield them from harm while they sleep.
“Kind hearts are more than coronets
And simple faith than Norman blood.”

The Scotch word “smooring,” smothering, is the nearest equivalent of the Gaelic word smaladh that occurs to me.

I smoor the fire,
As it is smoored by the Son of Mary,
Blest be the house, blest be the fire,
And blessed be the people all.
Who are those on the floor? Peter and Paul.
Upon whom devolves the watching this night?
Upon fair gentle Mary and her Son.
The mouth of God said, the angel of God tells.
An angel in the door of every house,
To shield and to protect us all,
Till bright day-light comes in the morning.

Carmichael, Alexander, ‘Grazing and Agrestic Customs of the Outer Hebrides’ in the Report of the Commissioners of Inquiry into the Condition of the Crofters and Cottars in the Highlands and Islands of Scotland (Parliamentary Papers, xxxiii–xxxvi, 1884), pp. 451–82.
Carmichael, Alexander, ‘Hebridean Hymns and Popular Lore’, The Northern Chronicle, no. 177 (21 May, 1884), p. 3, cc. 5–6.
Image: Blackhouse Hearth.
at 16:10