The Eagle and the Lamb

Continuing with the ornithological theme of the last few blogs, Alexander Carmichael noted down a short anecdote, presumably from a relation of the man mentioned, about how an eagle lifted a lamb from Heisker and carried it over to the mainland of North Uist. Unfortunately, the species is not given, but in all likelihood it was a golden eagle. 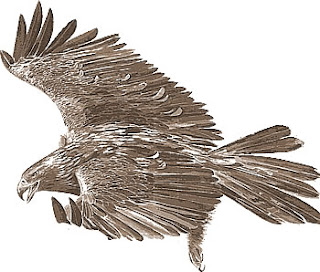 Don[a]l[d] Bhoradhai[dh] saw an eagle com[ing]
fr[om] Heusger with a lamb in its claws. He
had a horse halter in his hand & threw it up
at the eagle which drop[ped] the lamb at the
mans feet. The lamb’s ear was bleeding
but otherwise uninjured. The man
took it up bro[ugh]t it him and it be[in]g a female
it grew up and was the prog[enitor] of a flock
of sheep.
Carmichael adds a note indicating what he reckoned was the flightpath that the eagle took with its hapless prey:
Probably making
for Eaval Borodhay
being on the line
between Heusgeir
& Eaval