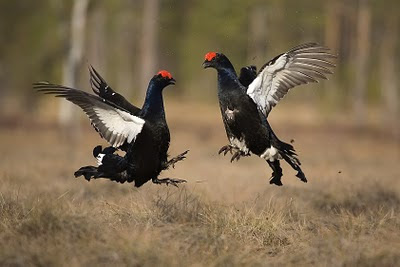 Some six months ago we published a blog giving Alexander Carmichael’s nature notes concerning Black Grouse or Coilich Dhubha. In a long, and somewhat rambling, letter that he sent in 1885 to the Rev. Alexander Stewart (1829–1901), or Nether-Lochaber as he was better known to his readers, Carmichael raises the topic once again. Stewart had been  resident in Onich in Nether Lochaber (Bun Loch Abar) since 1851, but he had been born in Benbecula where his father David had been an exciseman, just like Alexander Carmichael himself. The minister wrote a celebrated, more or less fortnightly column for the Inverness Courier which reflected interests just as eclectic as those of Carmichael. Indeed, Stewart’s columns proved so popular that some were subsequently published as the books Nether Lochaber: The Natural History, Legends and Folk-lore of the West Highlands (1883) and ’Twixt Ben Nevis and Glencoe: The Natural History, Legends, and Folk-lore of the West Highlands (1885). The excerpt concerning the Black Grouse Reel is as follows:
“I meant to have asked you long ago if you lived in a blackcock country, or if you are personally acquainted with the habits of black game? My reason for asking is this: you know the glorious old dance tune, or porst, sometimes post-a-bial [sic] called Ruidhleadh nan Caoileach Dubha–The Reeling of the Black Cocks. The tune proceeds thus:–

All this ‘reeling’ of the black cocks, and ‘dancing’ of the ducks, may probably seem foolish, if not absurd, to most men; but that the description is founded on the close observation of the characteristics of these birds, I am very sure. The old Highlanders were born naturalists. There were then close observers of nature–of birds and beasts, and of earth and sea, and sky. To that I can testify from having written down a good deal of their oral literature–Gaelic, Eachdraidh Chluais.