A Hot Poker as a Cure for Jaundice! 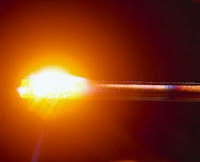 Folk medicine and cures are important genres for any collector and Alexander Carmichael was no exception to this general observation as is quite evident for an item, Eòlas na Buidheach (‘Charm for Jaundice’), taken down from the recitation of Angus MacEachen (c. 1810–1890) from Stoneybridge in South Uist. The story come directly from the informant and relates to a time when he was called upon to treat the daughter of a farmer, Roderick MacMillan (c. 1815–1900, in nearby Peninerine, also in South Uist.
Angus, from whom
I had the story and who told it to me with
much quiet humour, came
and solemnly examined the girl.
He then requested more peats
to be put on the fire which was
promptly done. He then put the
poker in the fire and every now
and then made much show
before the girl of seeing that it was
getting hot. When the poker was
red hot and the humurous Angus
took good care that the sick girl
could see that it was red hot
he requested them to turn her back
towards the front of the bed – stoc
na leapa – “stock of the bed” and
asked her mother to turn up her night
dress and lay her back bare and then
to clear out of the room immediately.
Angus then exhorted the girl to be brave
to bear up and fear not, that although
the pain of the operation would be ex-
cruciating for a time yet that it would
not last long. Angus then with much
ceremony and show rushed at the
girl’s bare back with the red hot poker –
na’m b fhior – “as if it were true – ”.
But instead of placing the red hot poker
on the girl’s bare back he placed thereon
a cold piece of iron which he had
in hiding till now. When the un-
sophisticated girl felt the cold iron
clapped against her bare back
she thought it was the red hot poker
of which Angus had been making so
much solemn show and ceremony
and she roared and roared and
screamed causing her mother and
all the people in the house to rush
into the room. Gu de tha agaibh
air a ghraidhean said
Angus ach gun deach i am
feothas sa liun agus an ceann
seacuin gu’n robh an nighean
mhor ruadh a mach feadh nan
cnocaibh??!


Apparently Angus took all the credit for the girl was cured of her ailment as she was out and about by the end of week. Carmichael then adds that the ‘fame of old Angus as an expert in the cure of jaundice was confirmed if that were needed.’ Such a 'cure' would not look out of place of some kind of torture scenario and it was in all probablity a mere coincidence that the girl recovered her health rather than as the result of a cure of doubtful medicinal benefit. In the second volume of Carmina Gadelica Carmichael later printed the above narrative, based upon his fieldwork notebooks, and where the actual charm was printed along with his translation: