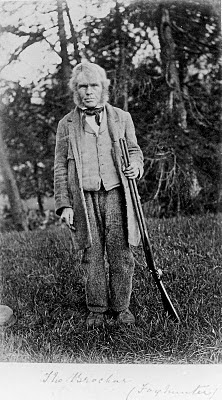 While Alexander Carmichael was collecting in and around Appin between the years 1883 and 1887, he recorded much local lore from a retired foxhunter nicknamed Dòmhnall Brocair, Donald MacColl (c. 1793–1886) from Glen Creran. This man remembered meeting and conversing with the great poet Donnchadh Bàn nan Òran, Duncan Ban Macintyre (1724–1812) and his wife Màiri Bhàn Òg, Mary Macintyre (c. 1750–1824) while the couple were touring round the Highlands looking for subscriptions in order to finance a new edition of the poet’s book which first made its way into print in 1768:
Do[mh]n[a]ll Brocair said
Don[nchadh] Bàn nan oran
in Glasdruim & Mairi
Bhan Og. He was ab[ou]t
5-10in[ches] & well made
& good looking. She was
fine handsome woman
Going ab[ou]t for sub[scriptions]
for 2d ed[ition] of his songs.
Donald was speaking to
Don[nchadh] Ban.


Donnchadh Bàn is remembered as a congenial, convivial and friendly character as well as, of course, being an outstanding poet and versifier. Anyone who had the temerity to raise his ire, however, would be mercilessy drubbed by his ready wit. He will be forever remembered for Moladh Beinn Dòbhrain (‘In Praise of Ben Dorain’). After spending around twenty years as a forester/gamekeeper in this part of Argyllshire, he removed himself (and family) to Edinburgh in 1767, where he took up his duties in the city guard. He produced nothing of any great note after this apart from his swan-song Cead Deireannach nam Beann (‘Last Leave-taking of the Bens’). He eventually retired from the city guard in 1806 and, apart from the occasional jaunts to the Highlands, was to remain in the Scottish capital until his death in 1812. A monument marks his grave in Greyfriars Churchyard and a further memorial to his memory was raised in his homeland on Ceann-chaorach, Dalmally, lying to the east of Loch Awe in 1859. MacColl probably misspoke when he mentioned the second edition: he was not even born by then as the book was printed for the second time in 1790. However, the third edition appeared in 1804 and so MacColl would have been aged about eleven when he spoke to Donnchadh Bàn, who was by then eighty years of age.
References:
CW120, fos. 49v–50r
Angus MacLeod (ed.), Òrain Dhonnchaidh Bhàin: The Songs of Duncan Ban Macintyre (Edinburgh: Oliver & Boyd, 1952)