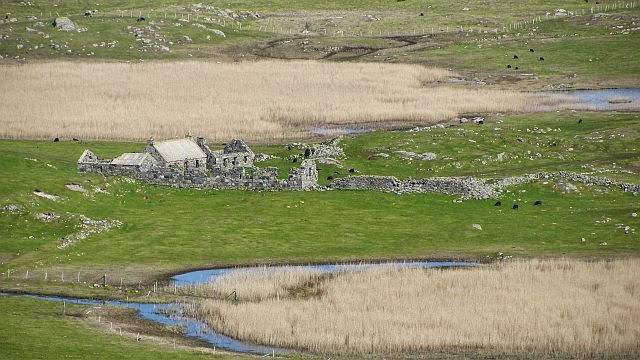 Tracing folklore in print requires much more than simply reading the ‘greats’ of the field such as John Francis Campbell and Alexander Carmichael. The Victorian press is packed with articles in periodicals and newspapers, and letters in correspondence columns, offering different and often conflicting accounts of curious local tales and legends. Many of these accounts, of course, would have found their way back into local oral tradition, influencing and inflecting the yarns told, discussed, and argued over in local céilidh houses – and, later, recounted to, and reprinted by, eager folklore collectors! Now that these sources are being digitised and placed online (for a price...), we can have a better understanding of the varied circulation of folklore in print over and beyond the monumental ‘folklore doorstopper’ collections sanctified by later generations of ethnographers.

The Inverness Advertiser’s description of the seal hunt on Hasgeir, published on 18 December 1849, devotes nearly a third of the report to traditions about the mysterious ‘Odder’:

a giant … very famous in the very remote era in which he flourished for mighty deeds of valour and prowess which we in these pigmy days cannot contemplate but with utter astonishment and veriest wonder.

The giant happened to be on Hasgeir, ‘perchance regaling himself with its eggs and birds’: a reminder that the the rocky island was far more useful as a food source to local communities than as a nursery of seals alone. Wanting to reach North Uist, Odar made a gigantic leap to the rocky shore of Griminis, where, as proof, the marks left by his heels are still to be seen. Odar’s head was reputedly buried at Griminis: fascinatingly, the interment was considered by later generations as giving the farmer of Griminis entitlement to the lion’s share of the seals hunted at Hasgeir every autumn.

Here, shorn of unhelpful speculative etymologies, is a later account by the antiquarian Erskine Beveridge, whose Vallay estate included the tack of Griminis:

[A]t Griminish Point (not half a mile south of Caisteal Odair) are yet to be seen the marks of Odr’s heels upon the spot where he landed after a leap of ten miles from Heisker, taken for the purpose of defending his wife. … On the farm of Griminish, a mile to the east of Caisteal Odair, is another site associated with it under the name of Ceann Odair or Penmore [Peighinn Mhór] … where, according to tradition, the giant’s head was buried, this fact conferring upon the tenant of Griminish a right to club seals upon the Haskeir rocks! The place-name is now applied to a field immediately west of the farm-steading.

It is fascinating that the name of the site where Odar’s head was buried was A’ Pheighinn Mhór, the Great Pennyland. Note that the reason why Odar made the leap is glossed over in the newspaper account: there was clearly another story, not fit for print, waiting to be told.

The most detailed account of Odar, ‘a great Scandinavian robber sea king’, was taken down by Carmichael, apparently in English, from Major James Andrew MacRae (1834–73) of the Inverness-shire Militia, ‘of Vàlley (and Griminish)’. The major was the fifth son of the local Church of Scotland minister the Rev. Finlay MacRae, whom we looked at in the last blog, and Isabella Maria MacDonald (d. 1882), daughter of Colonel Alexander MacDonald of Lynedale and Balranald, and so sister of James Thomas MacDonald (d. 1855), Seumas Ruadh, factor of North Uist, after whom he was probably named. He had succeeded his father to the tack of Bhàlaigh and Griminis.

The reason why the greater portion of the seals of Haisgeir went to Valley was this – Odar was a great Scandinavian robber sea king – a Viking – who ravaged the coasts of these Western Isles after the expulsion of the Norsemen and the crowning of Macdonald as Lord of the Isles. The King of the Isles announced that he would give a fitting reward to any man who would bring him Odar's head dead or alive. All were eager to distinguish themselves in capturing the great robber King. ‘Ga luath an sionnach beirear uairigin eir’ [‘Although the fox is quick, sometimes he’s caught’] Odar was captured at last at a point of land at Griminnish called ‘Caisteal Odair.’ This was done by MacUistean Ghriminish a near relation of Māg Onuil Lord of the Isles.


Macuistean carried Odan's head to his chief. In return for this signal service in getting rid of this ocean pest – this biast mhor a chuain [great beast of the sea] – the Lord of the Isles granted to MacUistean and to his posterity the seals of Haisgeir. Seals then were prized equally for food and oil – (Bu mhath am biadh feamanaich aran seagail agus sail roin [Good food for the seaweed worker is rye bread and seal fat]).

Major MacRae's tale is remarkably close to a transcription of an earlier Gaelic narrative, possibly recorded from an unnamed 'old man' in Scolpaig in 1865 [CW112/120 fos.92r–v].

The above accounts supply an explanation for the note made by Alexander Carmichael, probably from Archibald MacDonald, Baile Locha, on 15 November 1873, ‘Odar nan ron ceann an fhir mhoir a bha ’n Grim[inis]h’ [‘Odar of the seals, the head of the big man who was in Griminis’] [CW111/18 fo.5v]. Previously, the reciter had explained:

and had added the peculiar aside that:

Alexander Carmichael himself seems not to have understood his notes when he wrote the piece into a transcription notebook nearly two years later, on 8 October 1875 [CW112/36 fo.100v]. What the reciter appears to be claiming is that the ‘i’ sound in the local farm names is derived from Ì Chaluim Chille, Iona, and is evidence that the land originally belonged to Iona Abbey. What’s important here, and in Major James MacRae’s account given above, is of course nothing to do with how historically accurate these tales might be, but rather that traditionally the farms and their profits were felt not to pertain entirely to the clan chief. The spoils of the annual seal hunt at Hasgeir certainly went straight to the local tacksmen, though of course the estate creamed off some of the proceeds through extracting higher rents.