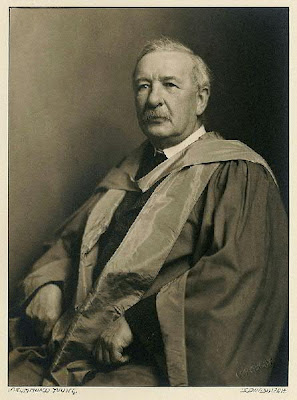 A figure sometimes overshadowed in the Carmichael Watson Project, but whose name certainly shouldn’t be forgotten, is William John (Ross) Watson (1865–1948). On his second marriage to Ella Carmichael (1870–1928), W. J. Watson became Alexander Carmichael’s son-in-law. Born at Milton in the parish of Kilmuir Easter in Easter Ross to Hugh Watson (1829–1893), a blacksmith, and Maria Buckle Ross (1829–1891), the precocious young Watson would grind himself out a brilliant academic career and would establish his name as the foremost Scottish onomastician of his generation. In an idle moment W. J. Watson jotted down some all too brief details about his birth and early childhood:
My mother’s people belonged to the Milntown of
New Tarbat, parish of Kilmuir Easter, where they
had some houses forming a small street. My
father belonged to Upper Kindeace, in the same parish
― a blacksmith, as his father was before him. The
smithy, now in ruins, stood by the roadside
above the brae from Tullich. The house, close by,
commands a magnificent view of the Cromarty
Firth & the Sutors & to the east the parish of Nigg
Through the Sutors we views the south opposite side of
the Moray Firth; altogether a view hard to
equal.
Milntown, where I
was born on February 17, 1865, is an old-
fashioned village, on record, in 1749 as “Myltoun
of Melthat with its two mills.” In my boyhood
I often visited our relations there, I enjoyed
their kindly company. There was (& is) a
village green, where a bonfire blazed on
New Year’s Day, Old Style. The village was
largely self contained – shops, public house, meal
mill, meeting house, shoemaker…


Educated initially by an uncle, James Watson, in Strathconon then later in Boath, Alness, he entered the Grammar School of Old Aberdeen in October 1880. From there he graduated with First Class Honours in Classics in 1886, and afterwards acted as assistant to Sir William Mitchell Ramsay, Professor of Latin at Aberdeen University. In the same year Watson entered Merton College, Oxford University, and graduated with First Class Honours in Classical Moderations in 1889, and again, in 1891, he achieved First Class Honours in Litterae Humaniores. During this period he was also an active athlete and gained a double blue in Throwing the Hammer and Stone. While at Oxford he came under the influence of the famous Celtic scholar Sir John Rhys. In 1894, after a short period in Glasgow, and at the early age of twenty-nine, Watson became the Rector of Inverness Royal Academy. At this time he became an active member of the Gaelic Society of Inverness and began to contribute articles to their Transactions. His main interest at this time was in onomastics, especially with regard to Gaelic place-names, as evinced by his early but still unsurpassed study of the Place-Names of Ross and Cromarty (1904). Some two years later Watson married – as his second wife – Elizabeth (Ella) Carmichael; his first wife Isabella Christina née Munro had died aged 33 on 25 September 1902. With Ella he had two sons: Alexander or Alec Carmichael Watson, born 14 December 1908, who died aged only 15 on 3 September 1923; and James Francis, later James Carmichael, Watson, born on 12 March 1910. By the time of James' birth W. J. Watson was the Rector of the Edinburgh Royal High School, a position which he held from 1909 to 1914. On the death of Professor Donald MacKinnon, the holder since its inception in 1882 of the Chair of Celtic Languages, Literature, History and Antiquities at the University of Edinburgh, Watson succeeded him and occupied this prestigious post until his own retirement in 1938. He was then succeeded by his son James Carmichael Watson, who, despite having grounds to forego military service, joined the Royal Navy in World War II and was subsequently posted missing in action, presumed dead, in 1942. Some six years later, in 1948, W. J. Watson himself passed away on 9 March aged eighty-three. He had suffered a great deal during his life: the death of his two wives and – perhaps the most grievous blows of them all – the death of both of his sons by his second marriage. W. J. Watson is chiefly remembered today for The Celtic Place-names of Scotland (1926), a work thirty years in the making and one which still stands the test of time, the primary scholarly reference to this fascinating subject area.