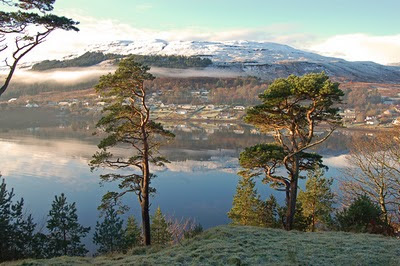 Continuing with a Ross-shire theme, in a short but nonetheless interesting piece taken down by Alexander Carmichael, probably from the recitation of Alexander MacKenzie (born around 1799), then resident in Uisgebhagh in Benbecula but of Gairloch origins, there is some information given about Fenian place-names.
Tha gleann an sgir Polliu air a
bheil Gleann na tullach. Tha Suidhichean
Fhinn air mullach na beinne.
Tha "Gleann-na-muic" ann an tao[bh]
tuath dheth n t shuidheach. Tha
uaigh Dhiarmaid an Gleann na
tullach agus an uaigh aig an
da ghe'ala chu aig a casan aon
air gach taobh.
The above may be given in translation as follows:
There is a glen in the district of Poolewe which is called Glen Tullach. Suidheachan Fhinn (Fionn’s or Fingal’s Seat) is on the mountain’s summit. Gleann na Muic lies to the north of this and Diarmad’s grave is in Glen Tullach and on his grave are two white hounds on each side of his feet.
Such onomastic traditions would have piqued the interest of Prof. W. J. Watson, for he wrote about such place-names in his first major work, The Place-Names of Ross and Cromarty (1904), where he states that Fionn seems to be referenced in the place-name Suidheachan Fhinn, but that it is one of many. In his book about Gairloch, John Henry Dixon (1838–1926)  fleshes out a little more detail about this place-name: ‘Again, there is a mound in a depression near the summit of Beinn Tarsuinn, called Suidheachdan Fhinn, or Fingal’s seat, where they say he used to sit and spy when hunting on the mountains.’ Throughout the Highlands and Islands there are many places associated with the Fenian warriors of a mythological past and stories such as these give a depth and resonance to those very landscapes. One of if not the most famous example of Fingal’s Seat (called Suidh Fhinn) lies just outside Portree, in the Isle of Skye, and views from its top offer a wonderful vista including, on a clear day, the mountains of Wester Ross.
References:
CW 104, fol. 35v
Dixon, John H., Gairloch in North-West Ross-shire: Its Records, Traditions, Inhabitants, and Natural History (Edinburgh: Co-operative Printing Co. Ltd., 1886)
Watson, William J., Place-names of Ross and Cromarty (Inverness: The Northern Counties Printing and Publishing Co. Ltd., 1904)
Image:
Fingal’s Seat or Suidh Fhinn, Isle of Skye
at 12:31