Carmichaels and the Stewarts of Appin 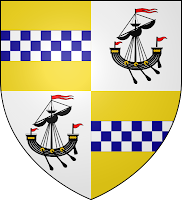 When Alexander Carmichael visited his native island of Lismore he would take the opportunity to write down snippets of information about historical traditions which had a bearing upon this part of Argyllshire. Being a Carmichael himself, he probably relished the thought of his clan name being the oldest in Lismore, the ones who could best claim seniority. But there may well be some historical veracity to this claim. Aside from being standard-bearers to the Stewarts of Appin, it is interesting to note the rôle carried out by the Carmichaels on the burial of a chief of the Stewarts of Appin. Carrying the coffin three times sun-wise (or deiseil) around the cemetery was a well-known phenomenon and, it seems, a very robust one: this presumably ancient burial custom was still being carried out within living memory.
Carmichael is said to be the oldest name in Lismore and the oldest in Appin and to have been in Appin before the advent of the Stewarts. […] Besides being standard bearers to the chiefs of Appin the Carmichaels were at the death of a chief (probably) to remove the body from the house to the […] upon lacking the place of burial the Carmichaels resumed possession of the body and carrying it three times sun-wise round the burying place laid it in the grave Then in conveying their heads and bowing reverently low towards the dead they all said together –
’Slan le fear mo ghraidh
Go m’ failtich mise rithist thu
Fare thee well man of my love
Till I hail thee again.
References: CW MS 383, fos. 183r–184v.
Image: Stewart of Appin Arms.