Alexander Carmichael’s Dedication to his Wife 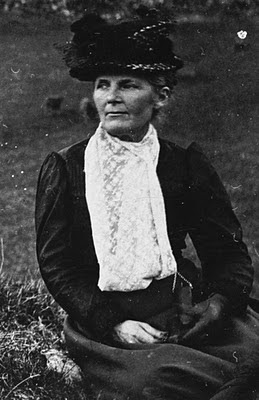 It should come as no surprise that Alexander Carmichael may be best described as an inverterate and constant tinkerer – he was fastidious and took great pains over his writing, especially with regard to his Introduction to Carmina Gadelica. Drafting and redrafting this particular, and it must be said rather tricky, part of Carmina was extremely important for a number of reasons: it allowed the author to give a general introduction to the reader with regard to the books’ contents; it also allowed Carmichael to try to explain the stucture of the present work and how the genesis of collecting and compiling finally reached the state in which it was ready to be published; the author’s editorial methodology would also be touched upon (something which Carmichael would at times lose sleep over) in order to forestall any potential criticisms; and finally where Carmichael could also acknowledge the assistance he received from many, many people, both friends and colleagues alike.
An example of a draft dedication penned to his wife is contained in one of his field notebooks and written down sometime after 1893:
This book is dedi[cated] to the [del: best of wives]
The best of ^[supra: wives] and the best of mothers
The severest of critics but the warmest of friends
Thee my beloved Mary.


In simple but apposite words Carmichael reflects the affection, warmth and respect that he showed his wife of more than two decades (at the probable time of writing). Certainly, Carmichael had a lot to be grateful about for it was his wife who had painstakingly undertaken the chore of drawing of the ‘Celtic letters in the work have been copied … from Celtic MSS … This has been a task of extreme difficulty, needing great skill and patient care owing to the defaced condition of the originals.’ One of the most distintive aesthetic touchstones of Carmina Gadelica is this very lettering and it would have been a rather different book (and look) if it had not been for her artistic input. But for whatever reason the above dedication remained in manuscript and instead Carmichael offered his thanks to his wife thus in Carmina’s Introduction:
Again and again I laid down my self-imposed task, feeling unable to render the intense power and supreme beauty of the original Gaelic into adequate English. But I resumed under the inspiring influence of my wife, to whose unfailing sympathy and cultured ear this work owes much.
There is no doubt that Carmichael was sincere when he penned these words but it is neither quite as touching nor as direct as the warmth shown in the draft dedication which never made its appearance in print. All this, it may be said, just adds to the adage that behind a good man is a good woman.
References:
CW129(g), fo. 253r
Carmina Gadelica, i, pp. ix–xxxvi.
Image: Mary Frances Carmichael (née MacBean)
at 18:09