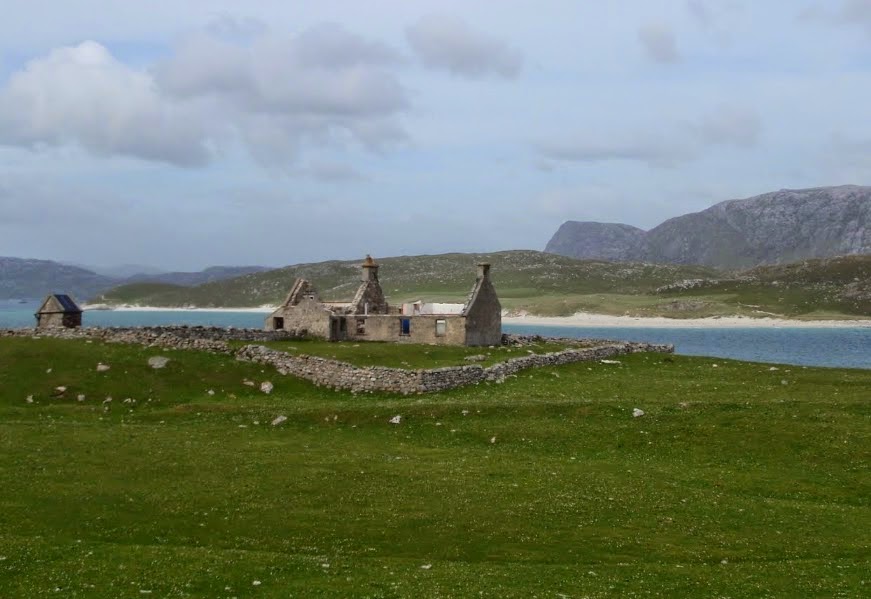 In the previous blog we set the scene: the now uninhabited island of Scarp, off the north-west coast of ‘mainland’ Harris, and the anecdotes that Alexander Carmichael recorded there in November 1881. We’re going to continue by looking at what we know about schooling on the island before Carmichael’s visit.
There had been schools in Scarp before. The first on record was opened by the Edinburgh Society for the Support of Gaelic Schools in 1821, shortly after the small existing island population was joined by many more cleared from their townships on the Harris mainland opposite, to make way for a sheep farm. Provision remained patchy for a generation, whether because schoolteachers were unwilling to commit themselves to such an isolated posting – a persistent problem for Scarpaich as long as the island was inhabited – or because the Society’s remit to circulating schools meant that it was not part of its plan anyway to fund a permanent employee in Scarp.
In 1856 the school in Scarp was taken over by the Association for the Religious Improvement of the Remote Highlands and Islands, better known as the Ladies’ Highland Association of the Free Church (LHA), in whose Sgoiltean nan Leddies – the Ladies’ Schools – generations of Highlanders received their institutional education. A contemporary anecdote about the advent of Sgoil nan Leddies is preserved in the Rev. Angus Duncan’s superb ethnographical history Hebridean Island: Memories of Scarp:
So anxious had been the heads of the island’s twenty-four families, that they told a delegate who visited the island that if he got a teacher for them, they would gladly row him not only to Tarbert, where they took him after his visit, but as far as Lochmaddy, forty miles away! That LHA delegate was the Rev Lewis Hay Irving, Free Church minister of Falkirk. A third of the island’s population, including married men – as was customary in the Highlands a hundred years ago – attended this Ladies’ School, the instruction consisting chiefly, if not entirely, of reading and arithmetic. [Duncan, Hebridean Island, 100–1]
The islanders’ strong desire to secure a permanent local teacher also comes through in a report compiled for the LHA on 31 July 1858 by the Rev. Alexander Davidson (1813–92), Free Church Minister of Harris:
The people are too poor to pay regular fees, but they provide Fuel for the Teacher’s use, with milk, fish, eggs, or anything they have. [National Records of Scotland ED18/1494]
Not only this, but the previous year the people of Scarp had built a schoolhouse on their own initiative at the south end of Baile Meadhanach [Duncan, Hebridean Island, 101], constructed with stone walls, floored with a ‘Composition of lime & Sand’, and covered with a thatched roof. The LHA itself donated £2 for the windows. Perhaps rather drily, the minister recorded that its ‘Condition as to Repair and Ventilation’ was ‘Tolerably Comfortable’. About fifty to sixty children attended the classes, instructed by a ‘Mr John McDonald, about 30’. Intriguingly, McDonald is recorded as being ‘formerly a Teacher in Cape Breton, N. America’.
Seven years after the passing of the Education (Scotland) Act in 1872, state education arrived in the Island of Scarp. On 2 June 1879, the new official teacher, another John MacDonald, took up the post. Born in 1848, John MacDonald had already been a teacher for eight years – he was recorded as such in the 1871 census – and had been certified by the Free Church Training College in Glasgow, which he had attended from February 1873 to December 1875. Lately he had spent over two years, between July 1876 and October 1878, teaching in Shieldaig on the other side of the Minch [NRA ED18/1494]. The family background of this John MacDonald is further elucidated by the Rev. Angus Duncan. MacDonald’s father was shepherd at Crabhadail, on the mainland opposite Scarp:
Fear Hùisinis [sheepfarmer Alexander MacRae] had a Highland shepherd living across the Sound at Cravadale, on the far side of Loch na Cleavag. Before the small communities were formed in 1885, his was the only place within six miles of our short ferry in which a stormstayed islander could pass the night. It is, therefore, not surprising that at a certain Communion season, no less than forty of our islanders spent a night in the shepherd’s house beside the loch. That was the age of the ‘shakedown’, when in an emergency all the spare blankets in a house were laid on loose straw on the floor to form beds. So well-known was the custom that the saying, ‘A straw out of each shakedown’ [sop ás gach seid], was applied to anyone who possessed only what he or she could borrow from others.
…
There is an interesting sequel to such trips [to the Lowlands] in the case of the Highland shepherd to whom I have just referred. Realising the value of a knowledge of English and a good general education, he resolved to have his family educated, no matter what the cost in personal sacrifice. The result was that two of his sons became schoolmasters, one being an Arts graduate of Glasgow University, while the other members of his family were all well-read and spoke fluent English. [Duncan, Hebridean Island, 78]
John MacDonald’s posting in Scarp provides the background to the anecdote referred to in Alexander Carmichael’s papers and printed in the previous blog. In our next piece we’ll review what we know about the Teampall, the old church in Scarp that was destroyed to supply building materials for John MacDonald’s new home.
Image: Scarp school and schoolhouse (Ian Johnston, www.mountainandsea.blogspot.co.uk)
at 15:12