Alexander Carmichael and the Island of Scarp - I 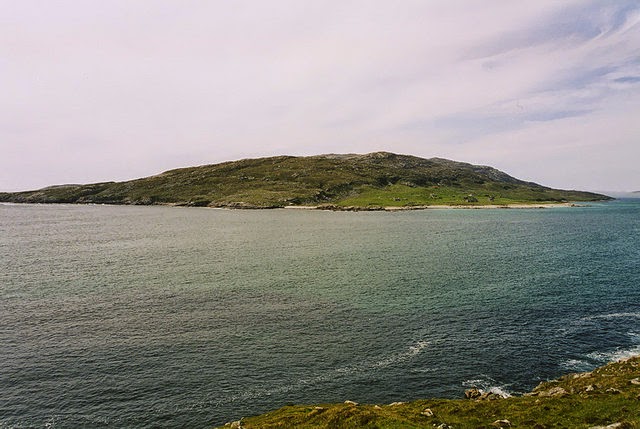 Recently we have heard quite a lot about the now uninhabited island of Scarp, An Scarp, four square miles in extent and separated by a narrow but dangerous channel from the mountainous north-west shoulder of ‘mainland’ Harris.

Firstly, in the Sir Iain Noble Memorial Lecture at Sabhal Mòr Ostaig in Skye, Dr Hugh Dan MacLennan gave a fascinating talk about his mother’s native island, and the summers he spent there as a boy. Again, in a recent programme on BBC Radio Scotland, Remembering the Men of Scarp, we heard Murdo Maclennan, who also spent boyhood summers on the island, describing how he tends the graves of two relatives there who had lost their lives in the Great War.

This made us wonder if Alexander Carmichael had visited Scarp. A quick check in the files showed that, of course, he had:

Teampull an Scarp was pretty entire till a few years ago, [deleted: at least from 6 to 7 six to seven feet of the walls] were standing till then. A schoolmaster came to the island a man with newfangled notions about things and he made the people pull down the ruined walls of the temple to build a chimney for himself in his school house – his fire before then being on the floor of his single roomed dwelling.

A small crogan [little earthen dish or jar] stood in the litter of the little temple. The crogan was small and white, pure white and beautifully fashioned. Every one admired and no one touched the crogan till one night a woman took home the crogan. But the woman was ill at ease for what she did she could not sleep at night and she could not rest by day and at least she repented her deed returned the crogan to the window of the temple. The crogan was no time there when it disappeared this time for ever – cha’n fhacas a dhath no dhreach riamh riamh tuilleadh – cha’n fhacas a dhuine choir riamh riamh tuilleadh a dha[th] no dhreach.

In Scarp Greenock is called Chrianaig instead of Grianaig.

During the eighteenth century, like the similar Hebridean islands of Eriskay, Scalpay, and Rona, Scarp was a relatively small, relatively infertile and relatively underpopulated outlier in the wider estate economy. Like these other islands, Scarp’s circumstances changed drastically during the great convulsions of the clearances: in the aftermath of the Napoleonic Wars, it became home to a large community of tenant families who had been evicted from the somewhat more fertile ground on the ‘mainland’ opposite. There they would serve as a labour reserve for the huge new sheep farm run by Fear Hùisinis, Alexander MacRae from Kintail, on the lands from which they themselves had been cleared. Even the most cursory glance at the microhistory of North Harris in the Age of Clearance reminds us that issues of colonisation, dispossession, deportation, relocation, and, indeed, diaspora, can be traced not just in the multicultural British Empire overseas, but in a specifically Gaelic milieu within the Scottish Gàidhealtachd itself.

Alexander MacRae (1787–1874) was the second son of Archibald MacRae of Ardintoul (1744–1830) and Janet MacLeod, one of the ten daughters of John MacLeod of Raasay who so impressed Dr Johnson when he stayed with the chief during his tour of the Hebrides in 1773. In Harris tradition, Fear Hùisinis does not enjoy the best of reputations. His father Archibald was apparently invited to the island on the advice of the hated local factor Donald Stewart; the family ties that connected them, and other members of the ‘island gentry’, have been explicated and elucidated in a series of outstanding blog articles by Peter Kerr.

The clan history, however, describes Alexander MacRae as a ‘good Catholic’, ‘a liberal and large-hearted man’ who ‘[a]s an amateur musician … possessed unusual taste and cultivation, and was an excellent violinist. He had also a keen appreciation of the national music and poetry of the Highlands’. It is perhaps not surprising that among the Tàilich that he brought to Harris were two important informants of Alexander Carmichael, the shepherd and seanchaidh Malcolm MacRae (c. 1806–66) at Abhainn Suidhe, and the dairymaid, singer, and all-round character Mary MacRae (c. 1790–1879) at Caolas Stiatair.

As well as contributing extra labour to Alexander MacRae’s sheep farm, the people of Scarp were expected to scratch a precarious living from the island itself – supplemented for a while by a little summer grazings, and later by a few patches of arable land across the sound. Above all, however, the Scarpaich were expected to turn themselves into fishermen. This they did with aplomb, celebrated for their remarkable seamanship – and oarsmanship – both in the treacherous waters around the island itself, and, for a while, with the long lines out in the open Atlantic.

As with similar islands such as Eriskay, Scalpay, and Rona, initially at least the islanders flourished in spite of the odds. Although the island lacked a deep harbour and safe anchorages, the Scarp fishing industry was able to keep the people alive. But during the century the population increased dramatically: crofts were subdivided to the point that by the time of Alexander Carmichael’s visit in 1881 the island was in danger of becoming severely overcrowded: 213 Scarpaich inhabited three adjacent townships. In the words of their representative to the Napier Commission in 1883, Scarp was ‘more of a pound or a fank than a habitation for them’. As the anecdotes recorded by Alexander Carmichael might suggest, during these years Scarp society was changing dramatically in other respects too.