Bait Holes in the Hebrides, and beyond 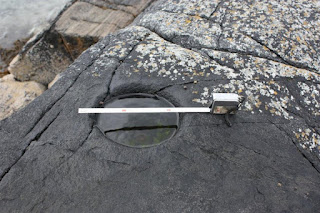 Toll sollaidh: man-made holes in rocks on the shore where fishermen would pound their bait. Carmichael writes about them on Carmina Gadelica ii, 361:
Sola, soladh, food, broken food – whelks, cockles, limpets, mussels, and other shell-fish broken and thrown into the sea to attract fish. The Lady Amie, wife of John, Lord of the Isles, sent men round the islands to make hollows in the rocks in which the people might break shell-fish and prepare bait. Such pits are called ‘toll solaidh,’ bait holes. These mortars resemble cup cuttings, for which antiquarians have mistaken them.
The original for this information is possibly to be found in a long excursus about Teampall Chàirinis in North Uist, recorded from John Mackinnon in Càirinis itself on 18 January 1871. The church was said to have been constructed on the orders of Amy MacRuairi, fourteenth-century heiress to the Lordship of Garmoran and supposed builder of Caisteal Tioram in Moidart and Caisteal Bhuirgh in Benbecula. She is misremembered here as Nighean MhicDhùghaill, ‘MacDougall’s daughter’:
Ni[gh]ean Mhic Dhuil used to send mason[s] to the gribeachun on the point to make pollagan sollaidh for fishing for the poor people. These are still seen. [CW116 fo.54]
Grìob or grìoba is explained in Dwelly’s dictionary as a ‘coast precipice, part of seacoast where it is rocky and difficult to land.’ We presume that this is the same as Cnip near Bhaltos in Uig on the west coast of the Isle of Lewis.
But there is more than one place with tuill sollaidh in Uist. Doubtless prompted by Carmichael, Mackinnon returns to the subject a couple of pages later:
Places where holes for Soll (soul) are each side of bun L[och] ephort Ru heva (?) [= Rubha  Heabhal] [?,] at B[aile]vanaich below Nunton ? & out at the baigh on east side B[en]becula. [ibid. fo.56]

The implication here is, of course, that these bait holes are important or interesting enough to be noted at specific sites – the best sites for rock fishing – around the coast. This reminds us that there was a time when creagaireachd, rock fishing, was not just something you did to pass the time of an evening; especially in times of dearth, it was an important source of food for the community.
Carmichael makes further vocabulary notes in his notebook CW108, possibly connected with a visit to Siolaigh Mhór in the Sound of Harris on 31 May 1877:
Sóll = Broken shellfish w[h]elks limpets
sgilleach-fionntrain thrown out for bait.
Slugag = The broken little hollow in this tis [sic] pounded. [CW108/68]
‘Sgilleach-fionntrainn’ is either a dialectal variation, or Carmichael’s misunderstanding of, gille-fionntrain or gille-fionn, glossed by Dwelly as ‘large periwinkle, white buckie, whelk’. Again in Dwelly, slugag just means a small pool.
As so often, Father Allan McDonald’s Gaelic Words and Expressions from South Uist and Eriskay adds even more. Soll is ‘pounded shellfish’; as for solladh: ‘pronounced like tolladh, the throwing of the soll into the sea to attract fish.’ Pollag is ‘a little hole in a rock in which shell fish is pounded to be thrown out into the sea to attract fish to the Carraig [fishing rock] or into the tàbh [hand net].’ A note added by John MacLean, headmaster in Dunoon and a native of Barra, records that cnotag is the word still used in that island; it is also the word used in Tiree. Usually in Gaelic, however, cnotag refers to a hollow stone or mortar for husking corn. One final evocative description for those of us who spent happy evenings doing creagaireachd or rock-fishing: snaomh, ‘swimming slowly along edge of shore, lake or river. Tha ’n saoithean a’ falbh air an t-snaomh.’ ‘When saithe or cuddies are on the snaomh, no soll [pounded bait] or maorach [shellfish] is required to entice them into the tàbh or bag net.’
In the journal Scottish Studies, 17 (1973), there is a wonderful little article by the late Sandy Fenton about ‘craig-fishing’ in the Northern Isles. It was reprinted in his The Northern Isles: Orkney and Shetland, which readers can (mostly) find on Google Books here. 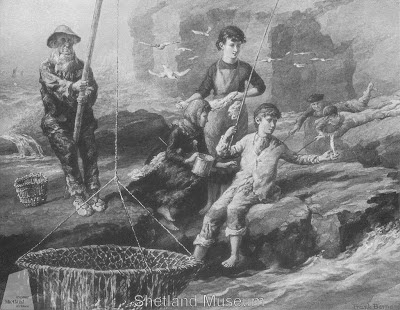 The piece is illustrated with a lovely picture by Frank Barnard from his Picturesque Life in Shetland of 1890. Here it is, from the Shetland Museum and Archives website. Note that in the Northern Isles – a phenomenon also recorded in Tiree – bait-holes are often found in threes: two smaller ones in which the bait was pounded (for instance, with the end of a fishing rod), and a larger one used for storage.
In the Northern Isles, mashed bait is called soe, clearly cognate with our soll. The word must have its roots in Old Norse. Our Norwegian isn’t the best, but we’ve found in the dictionary soll, ‘flatbread crumbled in milk, a mixture of cheese and milk’; and søl, ‘dish water, slop, mire, mud, slush’. Any help or suggestions would be most welcome.
The fascinating Canmore site of the Royal Commission on the Ancient and Historical Monuments of Scotland records a number of bait holes from all over the country. Many are in Tiree, and described in articles in the Proceedings of the Society of Antiquaries of Scotland by J. Sands and Ludovic Mann. In a more recent article in the Proceedings, Ronald Morris has suggested that the holes are ‘probably between a hundred and several hundred years old, but in some cases, in western Argyll, they may be older.’
Any further information, or sightings of bait holes by our readers, would be gratefully received!
Many thanks for Mark Hall at Perth Museum and Art Gallery for suggesting this subject to us.