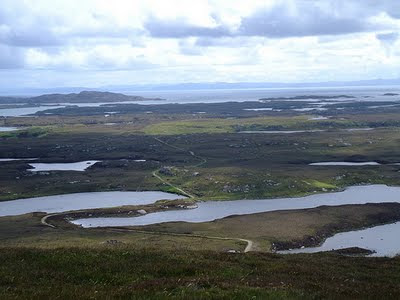 It was not completely unusual for Alexander Carmichael to note down succinct and short examples of Gaelic lore. Here, for example, is one that involves fairy cattle. Unfortunately, the Clanranald hero named in the story cannot be identified but his location is: Rosinish or Roisinis which may be taken to be the one in Benbecula rather than the one further south in Eriskay. He owned a cow but it gave little milk and so it happened that his wife one morning found three fairy cattle and went to milk them. A voice suggests that she spills a pail full of milk on the fairy-mound at Rosinish. She followed this instruction and she benefited by having plenty of milk thereafter. The story concludes with the woman’s death and the disappearance of the cattle. Presumably she could no longer provide a milk sacrifice to the fairy folk and so they then withheld their fairy cattle. Because the story has been summarised there is little to explain why the fairy cattle arrived on the scene in the first place:
A hero of Clanranald lived at Roisinis

& had 1 cow & but little milk. One morn[in]g his
wife saw 3 cro[dh] maol bui[dhe] & went to milk
them. A voice came to her at night & request[ed]
her to spill the full of the cuman
on the top of the sithein (Roisinis)
She did so each day & ever aft[er] she had
the cows & plenty of milk. When the woman
died the cows left & never ret[urne]d.
In Gaelic tradition such cattle are usually referred to as crodh sìdhe or mara (fairy or sea cattle). Elsewhere in Carmina Gadelica, Carmichael supplies a short note under the heading Crodh-mara, which he translates as sea-cows:


‘Cra-chluasach’, crimson-eared and ‘corc-chlusach’, purple-eared, are terms applied to a species of cattle with red ears which are alleged to be descended from sea-cows. Some of these cattle have one or both ears scalloped, and are hence called ‘torc-chluasach’, or notch-eared. Probably these red-eared cattle are descended from the old Caledonian cattle are also called ‘earc iucna’, notched cattle.
Several sea-cows came ashore at Struth, Obbe, Harris. The sea-maiden was tending the sea-cows, and singing the following song as she sent them back to sea and away through the Sound of Harris:–