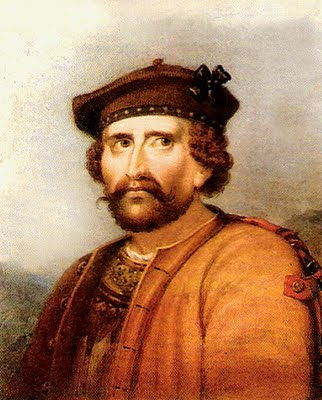 One of the most renowned of the MacNeil chiefs of Barra, Ruairidh an Tartair (fl. 1634), once challenged Rob Roy MacGregor (1671–1734) to a duel. Alexander Carmichael took down this information from Roderick MacNeil or Ruairidh an Rùma, who coincidentally shares the namesake of the protagonist in this short anecdote concerning a sidelight of Highland history. Others aver that the likelier candidate for the MacNeil chief in question was rather Ruairidh Dubh, who, after hearing of Rob Roy’s prowess with a broadsword, rashly challenged him. Rob Roy was no fainting lily-livered coward and took up the challenge and as a result the MacNeil chief almost lost his arm. Despite this rather ill-starred beginning they became fast friends:
Rua[ry] an Tart[air] once went to challenge
Rob Roy. He reach[ed] his house along
with one body ser[vant]. He ask[ed] Ellen
if her hus[band] was in. She repl[ied] that he
was at a market but that he must
be coming home by this time. He i[?nquired]
were any met a batch of gent[lemen] on
the road ask[ing] if they said one with
whom he had some business to him
– Rob Roy. Yes said one of the gen[tlemen]
What’s your bus[iness]
Nist or is dileac[hd]an boc[hd] mi
Oighre dir[each] eir Ois[ein]
Bha gri inns[eadh] chruai[dh] fhortain
Do Phad[raig]
Another version of the this duel is given by Alexander MacDonald in his article about the MacNeils of Barra that appeared more than a century ago in The Celtic Review:
At another time Black Ruairidh went to try Rob Roy. When he reached the district of Rob Roy he met a little man on a horse, and the little man looked very tired. Black Ruairidh asked him where Rob Roy lived. ‘You have him here,’ said the man, ‘and he will be very glad to welcome you to the district.’ ‘Well,’ said Black Ruairidh, ‘I am MaNeil of Barra, and since I heard of your having a great name I came to try you.’ ‘I am very tired just now,’ said Rob Roy, ‘after making a great journey, and you had better dwell peacefully with me this night and we will try each other to-morrow.’ ‘Out of here I will not go,’ said Black Ruairidh, ‘till you try me.’ ‘Right enough, if that is how it is,’ said Rob Roy, coming off the horse. The heroes began at each other, and at the first beginning the top of the ear was taken off Black Ruairidh, and Rob Roy asked him if that would do. But with the way that Black Ruairidh was so full of the wickedness that had given him his name, he said it would not do. At the next draw his right arm was in two even halves above the elbow. He could not do more at that time and he yielded. Rob Roy took him home with him till his arm healed, and Black Ruairidh was as faithful a friend as Rob Roy had after that.
References:
CW114/25, fos. 58v–59r.
MacDonald, Alexander, ‘Some Legends of the MacNeils of Barra’, The Celtic Review, vol. I, no. 3 (1905), pp. 264-67.
Sinclair, Rev. Alexander Maclean, ‘The MacNeils of Barra’, The Celtic Review, vol. III (1906–1907), pp. 216–23.
Image: Rob Roy MacGregor.
at 11:44