Folklore from the Hebrides: A Disclaimer 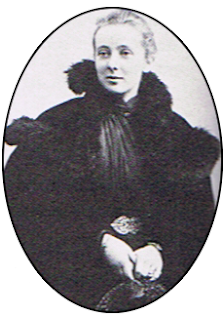 The reputation of Miss Ada Goodrich-Freer (1857–1931) was made upon the collection of folklore gathered together  by Fr. Allan McDonald of Eriskay (1859–1905). Maighstir Ailein, as he was affectionately known, originally hailed from Lochaber but will be for ever associated with Eriskay, an island lying at the southern tip of South Uist, where he served the remaining years of his priesthood. More than anyone else John Lorne Campbell proved that Goodrich-Freer unashamedly plagiarised McDonald’s folklore collection without paying him due acknowledgement.  She had accepted all the plaudits for his hard work while her own selfish end must have been at the uppermost of her mind. McDonald’s motivation for writing this short reply was to distance himself completely from Goodrich-Free while making it clear that had in no way borrowed material from him. Some two years earlier, on 7th October 1901, had written to McDonald expressing his concerns over Goodrich-Freer: “We hear from various sources that Miss Freer is not genuine and some call her a clever imposter. I never got my wife to believe in her. In it is said that one society after another, and one man after another, have thrown her off.”
In a paper entitled “More Folklore from the Hebrides,” by Miss A. Goodrich-Freer, read at a meeting of 6th November, 1901, and published 25th March, 1902, occur the following words: “In the very few cases in which I have presented examples already published by Mr. Carmichael in his Carmina Gadelica, it is because we have both borrowed from a common fount, the Rev. Allan Macdonald, &c.”
I should be guilty of an injustice to my good friend Mr. Carmichael if I were to allow the statement to pass without comment. The author of Carmina Gadelica borrowed nothing from me. I did put a book of notes at his disposal, as he courteously mentions in the introduction of his great work, but, as he tells us in the same paragraph, he was unable to make use of these notes, having so much material of his own. Mr. Carmichael has done more for the collection of Island folklore than any living man.
ALLAN M’DONALD.
Eriskay, South Uist, 7th January, 1903.