Columba of the Graves and Tombs 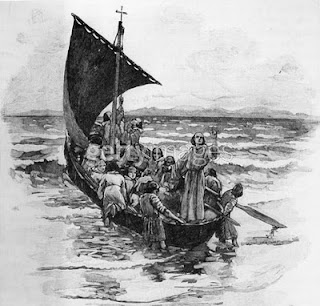 As may be remembered Alexander Carmichael’s printed output after the publication of the first two volumes of Carmina Gadelica was almost solely restricted to the Celtic Review. This journal, founded in 1904, and lasting until just before the outbreak of the First World War, was edited by Carmichael’s daughter, Ella, under the consulting editorship of Prof. Donald MacKinnon, the first incumbent of the Chair of Celtic at the University of Edinburgh. The year of MacKinnon’s death also saw the Celtic Review fold thus it would seem the impetus to continue publication was lost through this. Responding to a query from J. M. Mackinlay, Alexander Carmichael gave the following reply in the Celtic Review:
Calum-cille nam feart ’s nan tuam. Columba of the graves and tombs. (Carmina Gadelica, vol. i. p. 249 [recte 246].)


In the Celtic Review of April Mr. J. M. Mackinlay asks the meaning of this phrase. Like many other passages in the work, this was translated tentatively. I am under the impression that the phrase refers to the many churches, with burying-grounds attached, named after St. Columba.
Feart is a grave, a graveyard; tuam is a tomb, a place of tombs, a chambered place of burial.
Tung is also applied to a chambered place of burial, and sometimes to an underground house. ALEXANDER CARMICHAEL.
The context for the query was the last verse from Beannachadh Buana or ‘Reaping Blessing’, collected by Carmichael from Angus MacDonald, a crofter from Gearrynamoine, South Uist:
Air sgath Mhicheil mhil nam feachd,
Mhoire chneas-ghil leac nam buadh,
Bhride mhin-ghil ciabh nan cleachd,
Chaluim-chille nam feart ’s nan tuam,
Chaluim-chille nam feart ’s nan tuam.


Not content with just one query, J. M. Mackinlay also merited a response from Alexander Carmichael’s son-in-law, William John Watson, soon-to-be Rector of Edinburgh Royal High School and afterwards the second holder of the Chair of Celtic Languages, Literature, History and Antiquities at the University of Edinburgh. It can be seen that Watson was not shy in flexing his onomastic muscles, and his scientific method of enquiry can be easily discerned:
In last number Mr. J. M. Mackinlay queries whether Maolrithe (Carmina Gadelica, i. 285) is ‘to be identified with St. Maolrise, otherwise St. Finlagan, who is believed to have given name to Knock Mulreesh in Islay, near which is his chapel Cill Fheileagan.’
Maolrithe is none other than Maelruba, the genitive being used as nominative. The pronunciation is seen in Amulree, Maelruba’s ford.
Mr. Mackinlay also asks if Maolruain is a diminutive of St. Maelrubha. It is not. Maolruain is an independent name, occurring twice in the Martyrology of O’Gorman. The latter part of the compound is found with extension in the Irish word ruanad, a champion, whence the very common Irish name Maol-ruanaidh.
Whatever ‘St. Maolrise’ may be, Finlagan is a place-name, meaning ‘little white hollow,’ well known in connection with the Lords of the Isles. W. J. W.
References:
Carmichael, Alexander and Watson, William J. [W.J.W.], ‘Replies’, The Celtic Review, vol. 4, no. 13 (July, 1907), p. 96.
Carmina Gadelica, i, p. 246.
Image: St Columba, Calum Cille
at 10:03