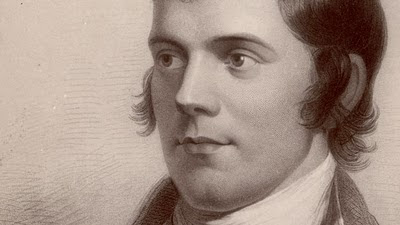 As today – or rather tonight – many Scots, both at home and abroad, will celebrate Burns Night, it would not be entirely inappropriate to see what Alexander Carmichael had to say about Scotland’s most enduring poet. Try as he might – and he tried very hard indeed – to claim Robert Burns, and, therefore, by extension the genius of his song and poetry – for the Highlands (and as a Campbell to boot), Carmichael would ultimately fail in his endeavour. Carmichael based his interpretation upon the tradition that Burns’s ancestor – called Walter Campbell, Ualtair Taigh an Uillt, that is, ‘Walter of the House of the Burn’ or Burn House, as well as being known as Fear Baile an Deòir. Now, this Walter, managed to outwit a pack of strolling bards called the Cliar Sheanchain by way of a ‘sleekit’ strategy as he had failed miserably in trying to get rid of them by outdoing doing them in satirical wit and sparkling repartee. A version of this tradition was noted down by Carmichael from an old schoolmaster, Duncan MacNiven (1804–1895), on 6 July 1892, who belonged to Cnoc na h-Àird near Taynuilt.

The Ceath[a]irne-Choill came
the way. They would not have
you if you gave them enter
tainm[en]t if not they took of[f] your
stock. Fear Bhail an deor had a
sail dharaich and he was splitting
up – He placed 8 on each side
and killed them all – with the sword.
16 of the ceithirn choill – because
they dwelt in woods.


Some twenty years were to pass before Carmichael managed to write up and eventually print a version of this tradition:


Walter Campbell felled a tree in a place known since then as ‘Glac-a-Chlamhain,’ the dell of the harrier, and ‘Glac nan cliar,’ the dell of the satirists. The dell scoops across a high ridge of glacial drift. It is narrow and confined on the south at the upper end, broadening on the north and expanding downwards to a wide plain. Walter Campbell asked the satirists to come out and help him to rend the tree, and they came. He placed half the satirists on one side of the tree, and the other half on the other side. He drove a wedge into the bole of the tree, and rent the bole along the line of the stem. Then he asked the men to place their hands in the rent, and to pull against one another, while he drove in the wedge. The men placed their hands as directed. Walter Campbell struck the wedge not in, but out, however, and the two sides of the rent tree sprang together like the sides of a steel trap, holding the hands of the satirists as securely as if in a strong vice. Walter Campbell, the son of the ‘deor,’ lost control of his pent-up anger, and he fell upon the satirists with great fury, and scourged them and maimed them, killing some and wounding others fatally.


The upshot was that Walter Campbell had to flee for his own life as he had broken the unspoken law of hospitality and where he eventually ended up in the Mearns of Kincardine. Carmichael continues with his supposition that, ‘Walter Campbell found people of the names of Burness, singularly like his own familiar cognomen of Burn-house at home in Muckairn; and as a slight disguise, he called himself by this designation of Burnhouse, dropping his clan name of Campbell. It was an easy transition from Walter Burnhouse to Walter Burness, Brunus, Burnes, Burns.’


A well-known fact is that Robert Burns’s descendants were called the Burness family from Kincardineshire, where they were tenant farmers. His father William moved to Ayrshire – where the prospects seemed better – in 1750 where Robert was born on 25 January 1759. One of Robert Burns’s great-great-grandfather’s was called Walter Burness who was probably born around 1625 and who died in 1670 in Bogjorgan, Glenbervie, Kincardineshire. So can this Walter be indentified with the one who escaped the West Highlands by the skin of his teeth? It is probably wishful thinking on Carmichael’s part for, along with a derivation that hardly seems to be water-tight, his romantic attachment to making a Scottish poetic icon be attached to a less than salubrious character seems a bit all too contrived and the evidence which he forwards does not make for a convincing argument to prove his point beyond any reasonable doubt. In other words, there is too much special pleading but it does make for an interesting story to say that Robert Burns was descended from a mass-murderer.