A Letter in Appreciation of Alexander Carmichael 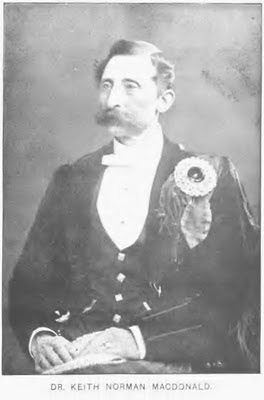 Of course not a few letters, following many obituary notices, of Alexander Carmichael appeared in the press after the sad news of his passing. A colleague and contemporary of Carmichael’s was Dr Keith Norman MacDonald (1834–1913), a Skyeman, and a medical graduate of the University of St Andrews, who wrote a rather idiosyncratic if revealing character sketch - especially of his singing prowess - of his recently deceased friend. MacDonald is chiefly remembered for three works: The Gesto Collection of Highland Music (1895); The MacDonald Bards from Mediaeval Times (1900) and Puirt-a-Beul – Mouth-tunes: or Songs for Dancing as Practised from a Remote Antiquity by the Highlanders of Scotland (c. 1901). The latter two books were first published as a series of installments in The Oban Times over many issues at the turn of last century from 1899 to 1901. Both were exiled Highlanders living in Scotland’s capital and it is little wonder that with their shared interests they should have kept each other good company and in good cheer.

THE LATE
DR. ALEXANDER CARMICHAEL
[TO THE EDITOR OF “THE OBAN TIMES”]
21 Clarendon Crescent
Edinburgh, June 23, 1912

SIR, – I would like to place a stone on the cairn of the late Dr. Alexander Carmichael, who was very well known to me for many years. He was my only cronie in this Babylon of motor cars and motor busses and other devilments of modern civilisation, and I finer minded man I have never met. He was truly a man without guile.
I often remarked to him that I would like to meet a real Christian, as I had never met one. The only people I knew were members of sects, and each of these would see the others in perdition! That made him smile with satisfaction, at least to me. Our conversations, however, and there were many, were nearly all about the past. I often told him in my private study that I felt perfectly certain that no man living or dead would have done what he did, without pay or promise of reward, except himself, and that he must have come into this world for that purpose.
When a man does that which is worth doing, and which no one else could do, and does it well, and is a genius, not after mammon, but after truth, and hands it down unsullied to posterity, he deserves the highest reward that his countrymen can bestow upon him.
He and I often mapped out journeys which we would like to make together. One was to the old castle of Dunsgaith, in Skye, near which I first saw the light; and knowing that a prehistoric stone coffin had been found near the place many years ago, it was to be our principal points for attack. Another was Selma, where Fingal’s castle was said to have been. This place was to be thoroughly roused and trenched all over, and it used to amuse him very much my recital of all the treasures I expected to find there. On making a calculation, I found that we would require £1000 a year each for travelling and working expenses, and as there was no chance of getting that out of “present Government” (!) the idea was dropped.
My friend was very staunch on the Ossianic question. He often told me he felt was sure as he was alive that James Macpherson had originally Gaelic poems for all he printed, but joined many of them together to make long epics of them. The late Dr. Blair of Edinburgh was of the same opinion.
The dear old man did not like controversy, but he was as true as steel to his convictions. He loved the Highland people with all the sympathy and affection at his disposal, and rejoiced in all changes that were likely to improve their condition. He had some disappointments, however. On one occasion he walked a long distance to see an old woman who possessed some secret powers of divination, but she would not budge an inch, and gave him no satisfaction. If I ever meet her, I shall frighten her! I know where she lives. During his fifty years of work and travel he met with very few such cases.
One great charm about Dr. Carmichael was that he had a lovely singing voice–a high baritone of the richest quality, which would have made him a “star of the first magnitude” if he had had early training, but even without any training a rich natural voice is at its best when unadorned by artificial dodges.
A few evenings before his death he called on me here, and after our usual conversation he sang for me “Tha rùn air a ghille” as no one else could sing it. On that occasion I talked of having his songs and a splendid pibroch gramophoned for posterity, but the spoiler came and took him away, and with him these and many other things that will never be heard again! Verily a great patriot has passed away from amongst us. Peace be to his ashes!–I am, etc.
K. N. MACDONALD