Every Song a Story – The Jealous Wife

The headline for this blog is a slight exaggeration, but nonetheless there is a strong tradition of song narratives in Gaelic culture and the ceilidh house, or any similar type of gathering, which would have provided an opportunity for the participants to discuss the finer nuances of just who composed a particular song or in which circumstances the song – whether a lullaby, a love song, a dirge or a lament – came to be. One of the most famous of Gaelic songs is A' Bhean Eudach, or the Jealous Wife, once widely known throughout Gaeldom and still popular among Gaelic singers to this day. It is unclear (so far) from whom Alexander Carmichael got the story, or rather stories, but it would appear that he is writing up an amalgam of different narratives from the many localities which claim the song to be their own. Each locality, of course, added its own local colour to the mix to give an air of authenticity. The story is basically the same for each place, although local variations have often been added: 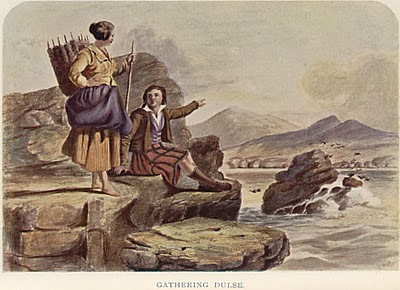 Eigg, Rum, Canna, Coll and Uibhist and
others of the Western Isles claim this song.
In Uist the scene is laid at Aird-a-mhachair
and the reef or rock is pointed out where
the unhappy woman was drowned. The
woman who decoyed the other woman
to the traigh dhuilisg – dulse shore is
said to have been the servant girl of the
house and who beacme enamoured of her
master. In Eigg the "bean iadach" –
jealous woman is said to have been
the sister of the wife who was drowned
The story of the drowning differs in
some slight details in the different islands.
The main features of the story are
these – The girl who coveted the
man got the woman to come
with her to the traigh dhuilisg – dulse
shore / ebb. The two women sat down
upon a tidal reef and the day being
warm and sultry the married woman
fell fast asleep while the watchful
girl crooned a taladh cadail – sleep-
ing lullaby. The girl as the story goes
tied strands of the womans hair to the
sea-weed upon the rock escaping her-
self before the rapidly flowing tide cut off her retreat When
the rising tide and the increasing waves
surrounded the sleeping woman she awoke
but awoke to find herself tied to the rock
and the tide already under her and round
her and her retreat cut off between the
rock on which she was and the shore. By the time the
woman got her hair untied from the sea-
weed the rock on which she was was al-
ready under the sea and the waves soon
washed her off the rock and into deep water
where she was drowned. When she went
home she told that they both fell asleep
under the heat of the sun and that when
they awoke their retreat was cut off – that
she got across le a beatha with her life
but that the woman was drowned.
The crime was discovered one day
sometime thereafter while the guilty
was grinding at the quern. The woman
was composing and singing the song
while he husband was listening near by.
Unknown to her the husband heard
the whole story.