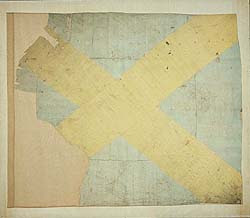 The impact of the Battle of Culloden, the last major battle to have been fought on British soil in 1746, will be forever imprinted upon the psyche of the Highlands. Alexander Carmichael lived and was actively collecting at only around two or three generations remove from those who had either fought at the battle or who had lived through the experience of post-Culloden society which saw a sea change throughout the Highlands and Islands. And, of course, though many would have been reticent about mentioning anything about Culloden and its aftermath, stories of heroism, heart-rending songs or stirring pipe tunes would and, in some ways, had to be remembered to commemorate the last and bloodiest of the many battles that were to see the Jacobite Rising of the ’45 eventually flounder and fail. On that fateful day, the Livingstones followed the Stewarts of Appin, and accompanied them at the Battle of Culloden, where Donald Livingstone saved the banner of the Stewarts, and conveyed it back to Appin. The family of Livingstones were Barons of the Bachull and received grants of lands in Lismore as keepers of the crozier or baculum of the Bishops of Lismore, known in Gaelic as the Bachull Mòr:
John Livingstone son of h Ach
na crei went to Morven his son Donald
fo[ugh]t at Culloden aged
18. Nine Donald[s] were shot
down carrying the Bratach of the
Prince when Don[ald] Livingstone
took it up and swathed round
his body. He was shot down and
was thought to be dead but he got up
with nine bullet wounds –
fresh wounds which were seen
in his body when he died aged
79 or 80 years old. Never had
trews on. He was drover to George
being commissariat to the garri
son at F[ort] William to the
last. Died at Morvern. He
had six sons – two of whom
were drowned on Cuan
na h-Eirinn having a ves[s]el of
their own with which they
traded to Ireland. There we[re]
2 da[ugh]t[er]s died unmarried.
Donald Molach – “hairy Don[al]d”
He was called – in Savary.
His wife Jane Stewart of
Ardslignish. The mother
of Donull Molach was Ann
Macinnes native of Morvern


Some of the story has clearly been exaggerated from the telling but it is based upon historical facts such as those provided by the Rev. Ian Carmichael from his book Lismore in Alba (1948):
The Appin Banner has a yellow St. Andrew’s Cross on a back-ground of light blue silk; the dimensions 5 feet hoist, with a fly of 6 feet 7 inches. It is now in the Military Museum, Edinburgh Castle, hanging beside the banner of the English troops-Barrel’s Regiment (King’s Own Royal) – whom the Appin Regiment charged and broke. Dark stains, said to be the blood of its defenders, are still to be seen, together with the marks of bullet holes…Twelve banners of the Highland Clans flew at Culloden. Only the banner of the Appin Regiment came home again. The remaining eleven were publicly burned by the common hangman at the Mercat Cross in Edinburgh.
As is stated, the banner named in Gaelic Bratach Bhàn nan Stiùbhartaich (The White Banner of the Stewarts [of Appin]) was kept for many years in the United Services Museum in Edinburgh Castle. It can still seen as it is now housed in the Jacobite Room in the New Museum of Scotland on Chambers Street, Edinburgh.
References:
CW 126(g), fos. 203r-203v
Ian Carmichael, Lismore in Alba (Perth: Leslie, 1948)
Duncan Livingstone, 'The Stewarts of Appin at Culloden', The Celtic Monthly, vol. 4 (1896), pp. 91-93, 119-20, 131-33.
Image:
The Appin Banner, National Museum of Scotland, Edinburgh.
at 12:21