Losaid na Gaoithe a Tuath – The Trough of the North Wind 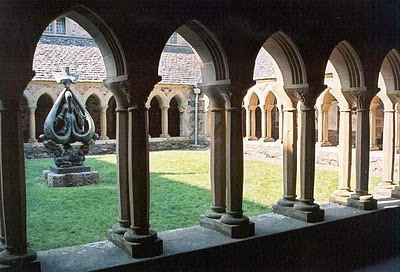 A rather intriguing piece of lore that Alexander Carmichael collected when he was, in all likelihood, in Iona concerns Losaid na Gaoithe a Tuath (‘The Trough of the North Wind’). This trough-like red gratite stone, according to oral tradition, was in the door of Iona Cathedral and was used in order to aid a ship in gaining a fair wind through divine intervention by supplicating St Columba (Calum Cille). The maiden - whose ancestors are said to have arrived from Ireland along with the ostracised Irish saint - in question is said have thrown three handfuls of water (presumably of the holy variety) into the stone and then in the name of the Trinity asked for as much wind as she desired:

Losaid Na Gaoth a Tuath =
Sgeip na Goath a tuath. The
Losaid is a stone of red granite of the cathedral
door Iona. The stone has a hollow
this hollow was cleaned out when
a boat was absent by a maiden
of the name of Nic
ille dhuibh daughter of the son of
Black in name of Father and
Son and Spirit the maiden
would get any wind she wished
from Calum-cille. Her progenitor
came over from Eirinn with Calum
cille Hence the claim of a maiden
of the name of Macilledhuibh o’n
Calum cille.
Losaid na Gaoth tuath – Losaid
of the north wind. Losaid, losad, a
trough, a kneading trough a vessel
for holding food, a table
full of food, a rich well laid out feed.
Gheobh maighdeann a Chlann
ic ille dhiubh gaoth air bith a dh iarr-
as i an Calum cille an ainm Athar
agus Mac agus Spioraid ach i a ghlan
adh a mach na losaid – losaid lon
ach na gaoth a tuath – the foodfull
trough of the north wind.
The maiden threw air tri boiseagan
uisge as an losaid in name of the
Trinity Gheobhadh i gaoth air bith
a dh iarraidh i duair a dhean-
amh i seo.