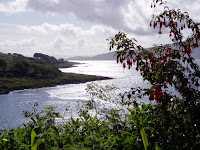 Some years after Alexander Carmichael had collected the various material that comprise his fieldwork notebooks, he would, in moments of reflection, take the time to reminisce about the characters from whom he had met and taken down material as well as having had the opportunity to share both their interests in oral tradition. One of Carmichael’s informants was Duncan Cameron, born probably in or near Lochaline, Morven, around 1818. Having spent much of his life as policeman in Tiree and Mull he passed away in Tobermory in 1900, aged around eighty-two. Duncan Cameron’s marriage certificate of 1856 reveals that his father-in-law worked for the Excise just like Carmichael and they may have shared a few anecdotes about illicit stills as they both had the duty of upholding the law.

Duncan Cameron was for over fifty(?) years
a Police Constable. He was a native of Morvern
but spent most of his long life in Mull and
Tiree. He had a distinct talent for
old lore and much he knew of the more valuable of old lore of
the people of Mull and Tiree among whom
he lived so long and was liked so much.
He was a man of quiet kindly tact and heart
and much liked by all. He had much old
lore of much excellence most of which died with
him when he died at Tobermory in 18[ ] at the age of eighty-
[ ] Mr Campbell of Islay mentions
Duncan Cameron. Duncan Cameron had
excellent versions of many things of great excellence
far superior to other versions that I have heard.
His version of the robing of Murdoch, the
son of Brian was much the best and fullest
and most poetic and pictury
version I have ever heard

There are quite a few items that were recorded from him that were later published in Carmina Gadelica: Coisrigeadh an Aodaich (‘The Consecration of the Cloth’) twice; Sian a Bheatha Bhuan (‘Charm of the Lasting life’); An Tuis (‘The Incense’); and a tale set in Mull entitled Mairearad Bhòidheach (‘Beautiful Margaret’).