A Place-Name Weekend in Oban 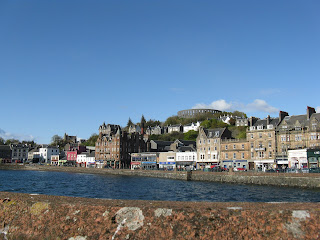 The Scottish Place-Name Society conference at Oban last weekend was a real pleasure to attend: the town was looking its best in the early summer sun, there was an excellent selection of papers, and, to round things off, we had a fascinating trip out and about in the surrounding countryside of Muckairn and Glen Lonan, in which Alexander Carmichael recorded so much during the 1880s and 1890s.

My paper, on the local folklore collections made by Carmichael and the Rev. Niel Campbell (1850–1904), Church of Scotland minister of Kilchrenan and Dalavich, dovetailed nicely with the one given by Brigadier John MacFarlane. Drawing upon voluminous papers compiled by his family in Taynuilt over several generations, about history, folklore, songs, poetry, and place-names, John offered a precious glimpse into a time, not that long ago, when Muckairn was an overwhelmingly Gaelic-speaking parish. Today, there’s only himself left of the seann seòid. Ach nach math gu bheil ur leithid ann!

Denis Rixson, well known as historian of the Rough Bounds and Small Isles, offered us a rigorous wrestle with the fascinating and controversial question concerning the meaning and extent of traditional land valuation assessment units such as merklands, pennylands, ceathramhan, davachs, and more, throughout the western Gàidhealtachd. A fundamental problem was summed up in his astute comment that there is absolutely no guarantee that the extent of farms and townlands remained static throughout the centuries. (If we factor in recent historical findings concerning the nature and influence of environmental changes and population mobility and variablity over the centuries, the challenge of synthesising medieval land assessments with later documentary evidence might be even trickier than we had hitherto imagined.)

Michael Hance of the Scots Language Centre explored contemporary usages and manifestations of Lowland Scots in place-names and toponymy, making the perhaps unanswerable point that if we have, for instance, Linlithgow and Gleann Iucha on a public sign, should there not be a place for Lithgae too?

Professor Carole Hough of Glasgow University gave an exciting overview of the new AHRC-funded Scottish Toponymy in Transition project there. Having nearly finished the Place-Names of Fife, the project is on a roll. The next focus for the team is Clackmannanshire and Kinross-shire, with additional research planned on Cunninghame (North Ayrshire), Berwickshire, and Menteith, subject of Peter McNiven’s recent excellent PhD thesis.

One personal highlight was the bus trip next day around Muckairn and Glen Lonan, led by John MacFarlane. It was intriguing to see the beautifully picturesque but perhaps less epic reality behind the heroic landscape summoned up by Alexander Carmichael, a world of Ossianic champions, clan strife and legend, battles prophesied or in the past, a cradle of great men such as Iain Lom, and the supposed homeland of the ancestors of Robert Burns and John Ruskin.

As one extra bonus, I was able to spend Sunday afternoon in the newly-opened 1745 House at Dunollie Castle, poring over the MacDougall Papers. This exceptionally important archive, together with the frankly amazing Hope MacDougall Collection (undoubtedly to feature in blogs to come), should make visits to Dunollie compulsory for all those with an interest in the people, history, and culture of the western Highlands. 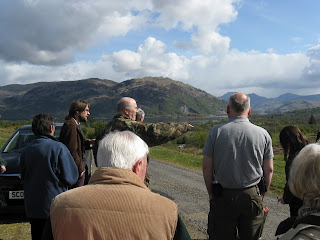 John MacFarlane talking the group through the site of the Battle of Daileag, fought between the MacDougalls of Dunollie and incoming Campbells. 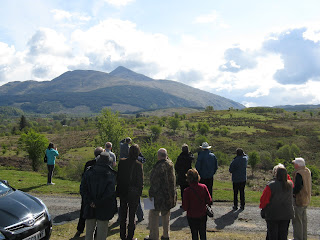 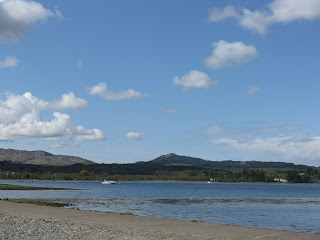 Airds Bay – the cottage where the Carmichaels lived from 1899 to 1901 is on the left-hand side behind the trees. 'Deagh Choimhead' in the background. 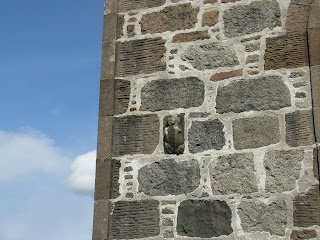 A sheila-na-gig in her latest home in the walls of the most recent Taynuilt parish church. 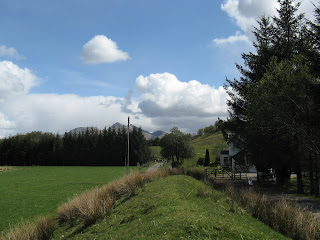 Dùn Tamhnachan/Duntanachan, where the Rev. Archibald Clerk (1813–87) of Kilmallie was brought up. 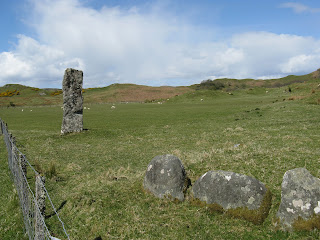 Clach Dhiarmaid at Tòrr an Tuirc. In the foreground, so legend avers, the enclosure in which the Ossianic hero was laid to rest.

Thanks to everyone involved in the Scottish Place-Name Society conference, especially Dr Jake King who organised the conference - and also to Catherine Gillies, Project Manager at Dunollie Castle.