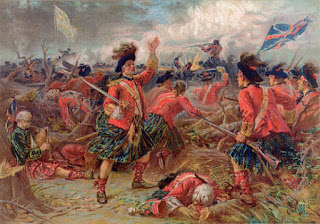 Here is Alexander Carmichael describing the genre of protective charm or seun in Carmina Gadelica ii, 26:

‘Sian’ or ‘seun is occult agency, supernatural power used to ward away injury, and to protect invisibly. Belief in the charm was common, and examples of its efficacy are frequently told.

Carmichael gives various examples of seuntan, for protecting cattle and ensuring long life, but the most spectacular instances are those which protect in battle.

A woman at Bearnasdale, in Skye, put such a charm on Macleod of Bearnaray, Harris, when on his way to join Prince Charlie in 1745. At Culloden the bullets showered upon him like hail, but they had no effect. When all was lost, Macleod threw off his coat to facilitate his flight. His faithful foster-brother Murdoch Macaskail was close behind him and took up the coat. When examined it was found to be riddled with bullet-holes. But not one of these bullets had hurt Macleod!

The battle seun was not just well-known in Gaelic tradition because of its remarkable effects. It was one of the very few charms which had found its way into print, and as a result it must have been a curio discussed in Highland céilidh houses. This printed version was collected about 1800 from an old man – probably an army veteran – in Glen Forsa in Mull and printed by the Rev. Norman MacLeod (1783–1862). Here is what the minister, under his pen-name Caraid nan Gàidheal, wrote about the seun in the periodical he edited, Cuairtear nan Gleann, in January, 1842:

There was one type of superstition which was once common in the Gàidhealtachd called a ‘seun’ – a sort of verse put [or set] up in fragments of linen, and sometimes [?with] a fairy-arrow, sewn tightly into a single piece of cloth. This was carried under the shirt, close to the heart: and silly folk strongly trusted that it had a great power to protect them from every evil and danger.
We acquired a seun of this kind which was used in Mull a long time ago. We don’t expect that any old woman, old man, or little boy in that country is now so foolish as to believe anything of the sort. In remembrance of bygone days, we give it here; and with this we’ll finish what we had to say at this juncture about these vain things.

Despite the minister’s pious hopes, it seems that in some parts of the Highlands belief in the seun remained strong long after the days of Caraid nan Gàidheal. We’ll finish this blog by reprinting the charm itself with a translation. Note how it looks as if Alexander Carmichael has adapted the text for his Sian a Bheatha Bhuan in CG ii, 28–31.

It’s interesting that Carmichael ascribes this text on CG ii, 378 to Duncan Cameron (c. 1818–1900), the policeman from Morvern whom Carmichael so respected for his knowledge of old lore. It might just be possible (a big if!) that Cameron had heard the text from the Rev. Norman MacLeod himself, who had been brought up in Morvern, or from his youngest brother John (1801–82), who had succeeded his father as minister of the parish. It might even be the case that the minister was given the charm by one of Cameron’s family. Here is the text as published in Cuairtear nan Gleann:


acquired forty years ago from an old man
in glen forsa, in the isle of mull


For him and for his prosperity,
The seun which St Bride put about the daughter of Dordheal –
The seun which Mary put about her Son,
Between [i.e. including] the soles of her feet and her throat,
Between her breast and her knee,
Between her eye and her hair.
St Michael’s sword by his side;
St Michael’s shield on his shoulder-blades.
There is nothing between heaven and earth
Which will overcome the King of grace.
No blades shall cleave you,
Sea shall not drown you.
The mantle of Christ about you,
The shadow of Christ over you.
From the top of your head to the sole of your foot,
The seun of luck is now on you.
You shall go in the name of the King,
And you shall come in the name of your Master.
With God and the powers together are you.
I will make the seun on Monday
On a narrow, sharp, thorny path.
Go out with the seun about your body,
And don’t be at all afraid;
You shall climb to the summit of the rocky mountains,
And you won’t be knocked down from behind.
You are the son of the calm Swan in the battle;
You shall stand amidst the slaughter;
Your shall run through five hundred,
And your enemy shall be caught in distress.
The seun of God about you!
A host going with you!

As well as giving another English translation of the charm, the Rev. John Gregorson Campbell MacLean in his Witchcraft and Second Sight in the Highlands and Islands of Scotland (Glasgow: James MacLehose and Sons, 1902), 69, supplies the following anecdote:

A charm of this kind was given to a smith in Torosay, Mull, by his father. Afterwards he entered the army and engaged in thirty battles. On his return home without a wound he said, he had often wished he was dead, rather than be bruised as he was by bullets. He was struck by them, but on account of the charm they could not pierce him.