A St Kilda Wedding I 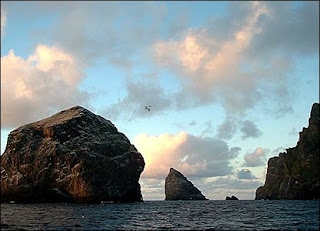 The lively reel called ‘The St Kilda Wedding’ has had many outings on record and CD over the years. Judging from a written account preserved in the Carmichael Watson papers, by the late nineteenth century a real-life St Kilda wedding may not have been quite so exhilarating. The following report comes from a speech delivered on 16 December 1886 by Ross-shire man Kenneth Campbell (1862–1929). Campbell had been employed as a schoolmaster on the island for a year during 1884–85 by the Edinburgh Ladies Highland Schools Association.

On a certain morning after ringing the school-bell as usual I awaited the arrival of the children. When they did come one of them ventured the information that a marriage was to take place that afternoon. On casting some doubt upon this statement, the boy replied, ‘Oh yes, they are just now polishing their boots in the house.’ …

About 4 in the afternoon I noticed a party of 4 people pass on their way to church. With bent heads & solemn faces they paced slowly & humbly on their way. Eager to see something more of this serious affair I followed to the church where I was soon joined by some others of the people who having been at work in the fields had thrown down their implements & come to church barefoot as usual. Looking round the church I saw the young couple with their 2 attendants seated in a corner, having their heads resting on the bench in front of them and looking the picture of misery. Now comes the minister who starts a long solemn discourse, admonishing, warning, advising. When he had married them to their own & his satisfaction they marched out of church as solemnly as they had entered, looking neither to the right or left. No handshakings! no congratulations! One could not help wondering what a funeral would be like when a marriage could be so miserable an affair.

Later on Campbell was invited to ‘a bit of a spree’ at the manse by the couple, each of whom had a bundle wrapped up in a handkerchief.

Arrived at the manse, we had tea. Nobody spoke. For my part I was afraid to speak, but at last in desperation I hazarded the question where the married party intended to spend their honeymoon.

At last, whether inspired by the tea I know not, but the bridegroom made a remark about the birds. Looking around the table I saw the bridesmaid busy untying her parcel, while the groomsman was quite as busy with his on the other side. After some tugging and a vigorous use of front teeth, the one brought to light three large oatcakes that had been prepared for the occasion, while the other produced a large piece of mutton & some cheese. The groomsman had to do the carving. With pocket knife in hand he succeeded in cutting [&] passing around a rib with its attachments to each of us. After some more edifying talk about the birds, eggs, feathers, and the weather we went home & heard no more of the marriage.