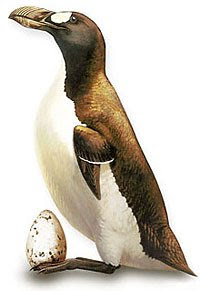 Carmichael’s is one of a handful of reports concerning the last British great auk, and like the rest of them was recorded long after the event. Even though it appears to be the only account we have written down by a Gaelic speaker, it is rather suspect, especially when compared to the much more circumstantial synthesis of accounts given by Alfred Newton (1829–1907), Professor of Zoology and Comparative Anatomy at Cambridge, to his fellow ornithologist – and correspondent of Carmichael – John Alexander Harvie-Brown (1844–1916). Professor Newton drew upon information he had received from the naturalist, sportsman, and St Kilda afficionado Henry Evans (1831–1904) with whom he had visited the island in 1887; Evans himself had recorded the story from Lachlan Mackinnon (Lachlann Eòghainn) (1808–95), a native St Kildan who was one of the party who had caught the bird – on Stac an Àrmainn rather than Stac Lì as Carmichael stated – and indeed claimed to be the very man who advised three days later, after a terrible storm had arisen, that it should be killed for fear it was a witch.

Carmichael’s account, focusing upon the St Kildans as a community rather than upon the individuals who caught and later killed the bird, demonstrates how the story of the great auk was already being transformed into a folktale by the time he recorded it in the late 1880s. It may nonetheless have preserved some authentic details. Perhaps most interesting for us is the point of the story for contemporaries: the St Kildans were woefully ignorant of the extraordinary value of the bird they had killed. In terms of average earnings, the price Carmichael put in the late 1880s on a single wing of the great auk, £100, would equal more than £50,000 today. With a bounty worth a fortune on each of their heads from museums around the world, it’s hardly surprising that great auks were doomed. Their very rarity was what killed them.

But when exactly did the event take place? Carmichael seems to be quite precise about the date, crossing out 1847 and putting 1848 in its place. This might tally with John Love’s remark in his fascinating new book A Natural History of St Kilda that it is rather curious that there is no mention of the killing in accounts by the several naturalists who visited the island between 1840 and 1847. If it was indeed in 1848 – and there were severe gales on the west coast towards the end of July – then Lachlan Mackinnon and his four companions may have killed the last surviving great auk on the planet.