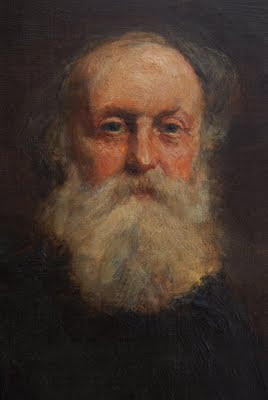 In his later life in Edinburgh Alexander Carmichael would often reminisce about the people from whom he had recorded such a treasury of lore and tradition during the years he spent in Uist. He recorded these memories in a number of draft manuscripts: it is difficult to say whether they were originally intended for publication, for reading to an audience, or just for his own pleasure. One touchstone of memory must have been the two days (6–7 April 1869) he spent with Duncan MacDonald of Snaoiseabhal in South Uist and his six-year old grandson Donald, whom we’ve already met in the blog. Carmichael clearly got on well with the old man, whom he describes as ‘a smart little man sorely inflicted with rheumatism. Has a clear blue eye & an intelligent face’. But it was the boy whom he remembered vividly many years after the event.
I took down several versions of the beautiful poem of Fraoch in Argyle and the Outer Isles. They all agree in the main but differ in detail. That, however, which I like best is a version written on the 7th April 1869 from the recitation of a remarkable boy six years of age, Donald Macdonald, son of Alexander Macdonald, crofter, Snaoisval, South Uist. Probably I took down in all from 400 to 500 lines of excellent old poetry from this wonderful child of song modesty and memory.
Among other things was a hymn which the boy called the ‘Hymn of Uist’. This resembles and may actually be a free rendering of the hymn of Saint Bernard entitled [ ]. If it be a free rendering of the Latin of Saint Bernard the Gaelic to my thinking is infinitely superior…
The only difficulty experienced with this boy was childlike, his disposition to gambol about with his companions. There were a kitten, a pup, and a lamb in the house and every now and then these three and the boy rose and had a frolic on the floor together.
The boy’s grandfather Donl mac an taillear, Donald son of the tailor [his actual name was Duncan] – a nice old man sat in a corner enveloped in friendly peat smoke and now and again scolded the boy in a friendly way for not attending to the gentleman.
At last fairly tired and done up these four playful delightful and frolicsome creatures lay down on the floor beside the friendly fire of peat and fell fast asleep. A shaggy little six-horned sheep an equally shaggy symmetrical black calf and a sturdy ragged little foal all by times and sometimes together looked in and sniffed the nestling group beside the fire.

In an earlier draft of this reminiscence, Carmichael carries on:

The writer too tired and fatigued drew his cloak over him and stretching himself on the wooden bench Gaelic, Seise, on which he sat, fell fast asleep and slept soundly till the cold awoke him in the grey dawn of the morning. Leaving the house as quietly as he could he washing himself in the first friendly stream, he walked on several miles to the house of one of his innumerable kind and most hospitable friends where he had breakfast.
One of the things obtained from this child was Laoidh Chrisd the Lay or Hymn of Christ, probably one of the finest sacred poems in the Gaelic language. It resembles and may actually be a fine rendering of the famous hymn of S Bearnard…
The field notebooks suggest that Carmichael’s memory of the event may not have been entirely accurate: before leaving their house, he recorded some thirty-two pages of material from the two MacDonalds. Afterwards, he headed down to Tobha Mór/Howmore on the other side of Loch Ròg (perhaps a mile or so away, rather than ‘several’!). There he wrote down several songs from another memorable acquaintance: Peggy MacAulay née Robertson (c.1820–81), ‘Peigidh Sgiathanach’, ‘a tall, straight, comely brunette, with beautiful brown eyes and hair “like a raven’s plumage, smoothed on snow”’ whom he had first recorded about a month previously. As Angus Macmillan has kindly pointed out to us, Peggy lived next door to where Mary Wilson was born and brought up, Mary being the mother of another great storyteller, Angus MacLellan (1869–1966), ‘Aonghas Beag’.

References:The original fieldnotes are to be found in CW MS 107 fos. 36v–56v.
Carmichael’s later reminiscences of the event are recorded in CW MS 172 fos. 1–4. His description of Peigidh Sgiathanach is in Carmina Gadelica ii, p. 213: see also p. 350n.2.
Image: Detail of the Carmichael portrait.
at 15:17