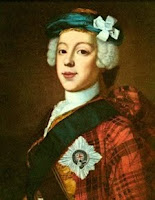 Have you ever heard about the fate of Prince Charlie’s pipes? Well, Alexander Carmichael collected some information about them, probably from Roderick MacLellan (1831-1887) himself, who lived at Bagh Thiarabhagh, Barra, about a set of pipes thought to be owned by Prince Charles Edward Stuart. It was “made of light coloured wood like boxwood and mounted with ebony and dotted all over with ebony like pin points” and upon the mouthpiece was inscribed P.C.E.S. along with the year 1744. On the chanter were inscribed two further initials H.B. (Hugh Brown), the official piper to the young pretender. The story goes that the pipes came into the possession of this royal piper and that he later married and emigrated to Canada. Many years later the informant’s brother, a seafarer, met a grand-daughter of Hugh Brown and these set of pipes, along with other Jacobite relics, came into his possession. This man was lost at sea along with his pipes for he used to carry them at all times. It is not known whether he was an actual piper but even if he was not MacLellan’s brother valued them highly.