The Shipwreck of the Racoon 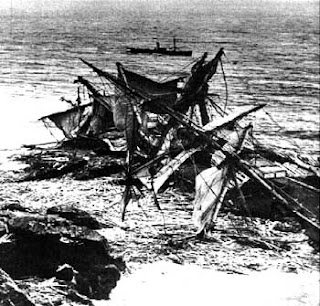 A random description of a shipwreck of the Racoon, probably dating to around 1875 when the anecdote was recorded, must be counted as one of Alexander Carmichael's most bizarre notes. Immediately following a prophecy attributed to Coinneach Odhar Fiosaiche, or the Brahan Seer as he is popularly known, which had been written down in rather a neat hand, the following description occurs but it may be assumed, given the appalling hand in which it was written, that it was taken down in haste and it may have even been the first hand recollections of one of the survivors of the wreck. More likely, perhaps, it was taken down from someone from Skye who had actually witnessed the events spoken about but unfortunately Carmichael gives no clear indication of this. The description takes up one full page and then stops abruptly leaving quite a cliffhanger. There is no indication why Carmichael stopped but perhaps he may have been interrupted or he had to attend to some business or another.
Racoon Isaac Jones, fr[om] Carnan
for Aberdeen Slates On Thursday
on the Point of Erisga ab[ou]t. 9 pm
took to small boat couldn’t r[e]ach shore
shiplength drift[ed] on to Sky[e] aft[er] a
landing at Dunveg[an] N[orth] 35 mil[e]s to
leeward from of[f] Bororey inside
Dun[vegan] N[orth]. People very kind to them gave
them old sho[e]s & clothing & got on to
Dun[vegan?] on Sat[urday] mor[nin]g. Course had
their bearings cont[inued] drift[ing] wreck[?] big
W[est] S[outh] W[esterly]. double reef canvas
from orders & put up helm hard
when in[?] aft[er] she struck. Part to own[ers]
in Aberdeen & part Carnan.
Left Bangor last Mon[day] week
Land[ed] at Dun[vegan] N[orth] ab[ou]t 3 pm no
food nor wa[ter] nor cloth[in]g. Drenched
to the skin. 6 men on board 2 in bed
& took to small boat 15 keel about…


Despite undertaking some initial research the piratical sounding Isaac Jones proves to have been rather elusive. We would, of course, be delighted to hear from anyone who knows more about this intriguing story.
Reference:
CW 105, fol. 55v