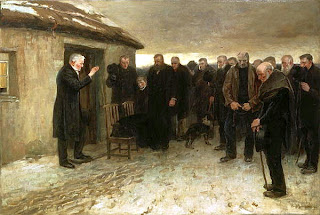 A rather intriguing as well as an important tradition noted down by Alexander Carmichael probably came by way of a Uist reciter. This short anecdote provides some biographical notes of a bean-tuiream, a professional weeper or keener, called Mòr Bhuidhe who hailed from Barra but travelled to Uist in order to fulfil her duties at a local dignitary’s funeral:
Mor Bhuidhe belong[ed] to Barra but us[e]d
to travel in Uist as a Bean-Tuiream
much respected. Co sin agaibh
eir na maidean said she aft[e]r she
had been a lasagaich sa tuir[ea]m
M’eudail is m’ai[ghea]r is mo run [th]u
Cha bu chùl dhuit Mac Uistean
said she when Mac Uisteans wife
was on the maidean who had been
one of the Vallay family. Cha tuirst i
fhein sin said Mac Uist[ean]


Elsewhere, Carmichael provides a more detailed account of the bean-tuiream in the second volume of Carmina Gadelica:
Gul, lament, weep. Mourning for the dead was a profession among the Celts, as in the East, and was generally done by women. ‘Bean tuiream,’ mourning woman, is the term applied to a professional weeper. ‘Tuiream’ is specially applied to mourning for the dead; ‘tuiream bhais,’ death-mourning. Similar terms are ‘seis,’ dirge, and ‘seis bhais,’ ‘seisig bhais,’ death-dirge, death-wail. In Ireland this is called ‘caoineadh,’ weeping, Anglicised ‘keening.’
Carmichael then tells of an occasion when he encountered a woman from Barra whom he does not mention by name. Presumably she would have been fairly old and so her memory of the ‘tuiream’ went as far back as the first and second decades of the nineteenth century. The description given here is rather evocative:
In 1870 the writer prevailed upon a woman in Barra to do the ‘tuiream’ as she had heard it when young. The funeral was that of a crofter at Castlebay who had died leaving a young widow and several children. As the funeral procession left the house the woman set up a plaintive cadence. At first her voice was low and tremulous, but gradually rose to a great height. The scene was striking. Below, on a tidal rock, was the castle of Ciosmal, now a roofless ruin, once the picturesque home of the Macneills of Barra, while the Atlantic waves dashed against the rocks, mingling their wailing with that of the ‘bean tuiream,’ weeping woman.
Carmichael’s entry discussing the ‘bean-tuiream’ concludes with two short humorous anecdotes:
An amusing story is told in the neighbourhood of Glen Dessary at Ceann Locharkaig, of weeping women who were paid ten shillings each for professional services at the funeral of two of General Wade’s soldiers. To a sad and mournful air they sang:–
‘Hi, ro, hi, ho!
Dh’ fhalbh na Sasunnaich,
Hi, hu, ho, hi!
’S dar a tig an t-aon la thilleas iad.’
Hi, ro, ho, ho!
The Saxon men are gone,
Hi hu, ho, hi!
And may the day never come when they shall return.
The Rev. Somerled MacMillan in his book Bygone Lochaber fleshes out a little more detail: “Two of General Wade’s soldiers had died under tragic circumstances at Kinlocharkaig. In older times it was the custom in the Highlands to employ hired mourners to “keen” for the dead, and so the English General thought he would adhere to the age-long custom. Certain MacMillan women were paid ten shillings for professional services at the funeral of the two soldiers.” It is very doubtful indeed that the keening women would have seen their money if the paymasters had understood what they were actually singing!
A Lochaber woman in Glasgow was taken to see Richard III. In the course of the play she exclaimed – ‘Ach a Mhoire Mhathair! co iad na mnathan tuiream?’ – But, Mary Mother! who are they the weeping women?
References:
CW 106, fol. 38r.
Carmina Gadelica, ii, p. 309.
Somerled MacMillan, Bygone Lochaber: Historical and Traditional (Glasgow: privately published, 1971), p. 202.
Image:
A Highland Funeral (1882), oil on canvas by Sir James Guthrie (1859-1930).
at 16:31