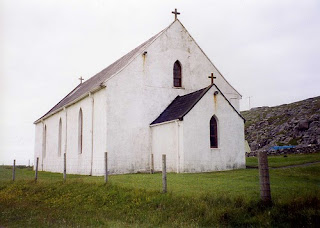 Archaeological remains, particularly those of an ecclesiastical nature, held quite a fascination for Alexander Carmichael. On 5 March 1869, took time out of his busy schedule to jot down his observations concerning Caibeal Bhrianain at Borve Point near Craigston, in the isle of Barra:
Caibial Bhrianain with taigh eisd
eac[hd] at end. The orig[inal] entrance to the Con
fessional is thro[ugh] the chapel. The walls
of the chapel can orig[nally] be traced but those
of the Conf[essional] are up a few feet. As the door
is in the centre of the wall at east end the
altar must have stood at the west end
surely an unusual thing. The original
door was 37.4 In[ches]. At north side of door a piece
is built up and the door stands now 2½ f[eet].
A Mr Aon[gh]as mac Fir Dhaileile
is the only priest who is known to have
died in Barra and he is said to be
buried in the caibeal beag – 2 & the
taigh eisdeac[hd] at end of chapel
here at Borve.


Elsewhere, in Carmina Gadelica, some traditions were recorded about St Brendan from a smith named Malcolm Maclean (1815–1881), Kentangval, in Barra, who Carmichael later recalled as being ‘a man of quiet wit, natural intelligence, and independence of mind.’ It is a bit too long to give in full but here is the gist of the story which explains that Dòmhnall Dubh Mòr took to working on the Lord’s Day and is said to have ‘had opinions of his own about Saints and Saints’ days, in consequence of which he and the priest of St Brendan had occasional rubs, sometimes bordering on anger. The man was neighbourly and industrious, but some said sceptical and irreligious, barely observing the Sunday, and hardly even the Feast Day.’ On the feast of St Brendan, Dòmhnall decided to go ploughing instead of attending Mass. When he began to work a magic mist descended and transformed his horses and plough. This he tried three times but finally had to give up the ploughing as a bad job. Those who knew Dòmhnall rebuked him ‘for disturbing the rest of the blessed Brendan, and breaking his holy day.’ Such was the ‘curse’ laid upon him that Dòmhnall Dubh’s comely young wife ran to the priest for help. ‘Let Domhull Dubh Mor revel in his agony,’ said the priest, “till he shows by his good deed contrition for his evil ways.” But the good priest came notwithstanding, and, after administering a rebuke to Domhull Dubh, sprinkled on him the water of peace, and bade him go and give alms to the poor and the needy made in the image of God, and sin no more.’