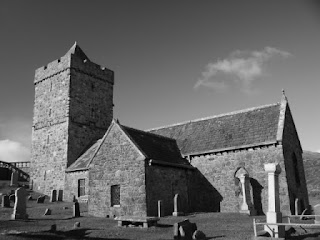 It really should come as no surprise that an inveterate wearer of the kilt, as Alexander Carmichael most certainly was, expressed an opinion or two about the so-called ancient dress of the Highlanders. A lecture entitled ‘Bards and Bardism of the Highlanders’, which Carmichael had been working on over several sessions while he was resident in Cornwall, contains the following aside about kilts which deviates from the main thrust of the rest of his essay. Some of the purple prose pouring from Carmichael’s pen can be discerned from this extract but mercifully this has been kept to a minimum. Perhaps the exuberance of youth as well as a man still honing his skills and reaching to find his own voice are but some of the legitimate excuses for some of Carmichael’s stylistic excesses:
Some are for maintaining that the
kilt is but a modern dress. It is strange
what ready credence anything dem[ons]tr[a]ted to the High[lands]
is received. However distorted the facts and uniform
ed the story if it makes against the High[lands]
it receives easy credence. And on the
other hand again any thing said as
an antidote to this however respectable
the authority and well confined is
received with distrust.
There are many indisputable facts
that confirm the antiquity of the
kilt. There is an abbey in the Island
of Harris which is believed to be one of the
oldest pieces of architectural remains
in Scotland. The abbey is called Saint
Clemens = “Cill-a-Chliamain.”
Among curious figures on the
tower of this old abbey is a sculp-
tured figure of a Highlander. The
dress is exactly like that worn at the
present day. The kilt comes to the
cap of the knee while the rest of
the dress corresponds with that now worn.
Another impression is that tartan
is not old. This is another erroneous
impression. Tartan is old. In a Gaelic
M.S. of the 10th century the term breacan
literally chequered tartan is expressly
used. It is some what strange that
the English should pronounce the word
plaid more like the original G[aelic] pronounci
ation than the Scotch do. The English
pronounce the word as if written plad
while the Scotch pronounce it according
to the orthography. The original of the
word was plaide now confined
to the blanket. In ancient times when the
Highlanders were more given to hunt-
ing and fishing and battles and
perchance to creach lifting than they
are today their plaids joined their
blankets. Rolled up on these they slept securely
their bed the purple heath[er] and the curtains
the blue azure vaults of heaven.
It is likely that Carmichael is referring to a carved panel inset in the Irish manner (and possibly earlier than the actual church) which includes a kilted figure, that had formerly been mounted on the medieval parapet on Tùr Chliamainn or St Clement’s Tower as can be seen in the above image of Rodel Church, isle of Harris.
References:
CW 107, fol. 5r–6r
Image: Rodel Church, Harris
at 18:11