The Cailleach or Corn Dolly 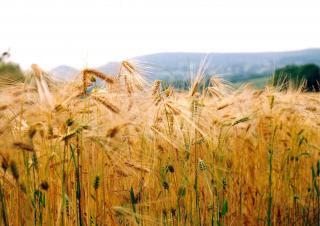 Once a widespread European custom was to form a corn dolly or maiden out of the last sheaf at harvest time. Traditions of such customs were still in living memory during the 1960s in Scotland, and perhaps they are still being carried out in some parts of Europe. The most common Gaelic term for this last sheaf is ‘cailleach’ but it is also referred to as ‘maighdean(n) bhuana’ or ‘harvest maiden’  and also ‘clàidheag’ which became in Scots ‘clyack’. The following three short anecdotes were probably collected by Alexander Carmichael from Angus Currie (c. 1787–1877), described as a pauper from Iochdar, South Uist, on 30 October 1872. In such rural settings there was a measure of pride fuelled by rivalry in being the first to gather in the harvest. Whether out of spite or just for fun, a neighbour who had finished the harvest work would invariably throw the cailleach over to a rival neighbour who was still toiling away taking in the corn.
The “cailleach” was sent fr[om] a neigh[bou]r
who finish[ed] cut[in]g his corn to his unfinish[ed]
neigh[bou]r. This was consid[ered] a great disgrace
& has been the cause of many quarrels.
A man went fr[om] Bornish on horse
back with the cailleach & left it Milton.
A man started aft[er] him caught
him in Ro[e]-glas bro[ugh]t him back
shaved his whiskers & head & sent
him home with bearradh eoin
us amadain.
Dul an Droma in Gearry
Geanacha sent the Caill[ea]ch
to Patra Nicolson Cnoc na
moine Ben[becula] The mess[en]g[e]r
was cau[gh]t stript naked & so sent
home. A tacksman would
rather find his best cow dead
than the cail[leach] in his iomaire buain
Two neigh[bours] at Ioc[hd]ar had about
equal buana to do at night. One
got up at midnight so as to finish
before his neigh[bour]. Just when near
his buain he met his neigh[bour] ret[urnin]g
home after finishing & building a
cairn at the end of his neigh[bour’s]
rig wherein he stuck the cail[leach].
The cail[leach] is the last cut sheaf
of corn decorated up with cuiseagan
buatharlain & tied with rags &c


According to Calum Iain Maclean in a posthumous article, the name given in some parts of the Islands and West Highlands to the last handful that was thrown into the plot of a neighbour was a’ Ghobhar Bhacach, presumably meaning the Lame Goat. Such a name gives quite an appropriate description of a sheaf of corn thrown at neighbour who is behind with the harvest. In other parts of the Highlands and Islands the ‘cailleach’ was dressed up with ribbons and took pride of place at the Harvest Celebration. By the time Carmichael collected these anecdotes, it would seem that the custom of the last sheaf was probably still fairly strong, but by the end of the nineteenth century it seems to have been in decline as Calum Iain Maclean noted:
In the last century, however, in Uist, the sending of the sheaf gave rise to nothing more than an occasional outburst of vituperative verses about the cailleach, reviling her as if she were an ugly old woman. According to the late Fr. Allan McDonald, the townships of Daliburgh and Kilphedar fought about the cailleach, but the practice has now ceased in South Uist. When one crofter finishes his harvest before his neighbour he says “Chuir mi a’ chailleach ort”, “I have put the cailleach on you”.
References:
CW 106/118, ff. 41r–41v.
Maclean, Calum I., ‘The Last Sheaf’, Scottish Studies, vol. 8 (1964), pp. 193–207.
Image:
Corn field.
at 15:30