The Shipwreck of the Racoon - II 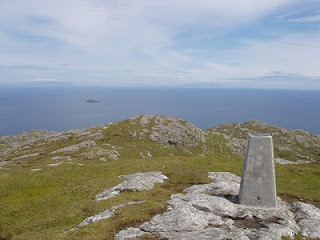 We’ve been carrying out further research into the wreck of the Racoon – the internet can be a wonderful thing! – and can now fill in some gaps in the account.
The schooner Racoon, under her master Isaac Jones from Caernarfon (not Càrnan, South Uist, as we had first thought!), left Port Dinorwic / Y Felinheli on the Menai Strait loaded with a cargo of slate from the quarries there on Friday 3 October 1873. She must have sailed up the strait, under the Menai Suspension Bridge, and put into Bangor for the weekend before setting sail for Aberdeen on Monday 6th. Three days later disaster struck. It looks as if the schooner was blown off course while sailing to the west of the Outer Hebrides, possibly struck rocks to the south of Eriskay, before foundering that evening on Eilean Thairteamul a couple of miles to the east. The crew took to a small boat, but they were unable to get to shore. They were driven up the Minch and, having endured what must have been an uncomfortable and frightening night, were lucky to make landfall at Borreraig in Loch Dunvegan on Friday 10th.
As the local exciseman, Alexander Carmichael was also the local Receiver of Wreck, responsible for compiling reports about any ships which had come to grief on the shores of the southern Outer Hebrides. It looks as if Carmichael travelled from Uist to Dunvegan in order to interview the crew; it also looks as if he took the opportunity of voyaging a bit further afterwards. If Oban was the ‘Charing Cross of the Highlands’ at this time, then Dunvegan was the Oban of the northern Highlands, with steamers sailing to a variety of mainland and island destinations. One of these ports was Stornoway in Lewis, and we can be fairly certain that Carmichael took the opportunity of travelling to that island – either after interviewing the crew of the Racoon in Dunvegan, or maybe because they themselves had already taken passage there. Whatever the case, we find Carmichael acquiring a wooden plough from Norman Graham in Am Bac, Lewis, on Friday 17 October 1873, then travelling through Tolstadh fo Thuath to Sgìre Nis on the same day. He must have stayed in the district for at least ten days, filling in much of his important field notebook CW MS 115 – seemingly an exercise book ‘borrowed’ from a local school! – on Monday 27 October. Just over a week later, on Tuesday 4 November, Alexander Carmichael is back in Uist.
We might owe to the wreck of the Racoon the fragmentary but fascinating glimpses into contemporary Lewis folklore recorded by Carmichael that autumn in 1873. There might be more information about her fate in the National Archives at Kew: folder MT 10/165 is referenced as ‘Stornoway: Expenses in connection with sale of Wreck ‘Racoon’’.
References:
http://canmore.rcahms.gov.uk/en/site/262756/details/racoon+thairteamul+sea+of+the+hebrides/
‘Shipping News’, Dundee Courier, 8 October 1873
CW MSS 111 fo.2; 114 fos.89–90; 115; 512 n.f.
Image:
A view from Eriskay out to Eilean Thairteamul, last resting place of the Racoon (photographer Calum McRoberts, www.geograph.org.uk)
at 15:11