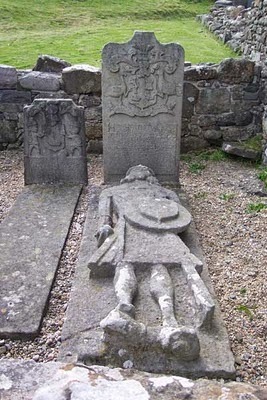 St Kenneth’s Chapel stands on Inch Kenneth or Innis Choinnich, a small isle situated at the mouth of Loch na Keal on the isle of Mull’s western shore. Alexander Carmichael jotted down notes about some of the gravestones when he visited on 17 August 1886. Sir Allan Maclean of Brolas (1710–1783) was the 22nd chief of the Macleans and entertained Boswell and Johnson over a weekend in mid-October of 1773 on their tour of the Hebrides. An extract from which reveals that they both took delight in their visit:
We told Sir Allan our desire of visiting Icolmkill, and entreated him to give us his protection, and his company. He thought proper to hesitate a little, but the Ladies hinted, that as they knew he would not finally refuse, he would do better if he preserved the grace of ready compliance. He took their advice, and promised to carry us on the morrow in his boat.
We passed the remaining part of the day in such amusements as were in our power. Sir Allan related the American campaign, and at evening one of the Ladies played on her harpsichord, while Col and Mr. Boswell danced a Scottish reel with the other.

We could have been easily persuaded to a longer stay upon Inch Kenneth, but life will not be all passed in delight...


Carmichael’s visit may have been less entertaining but the recumbent effigy of the Maclean chief must have caught his attention otherwise he would have passed it over:

Sir Allan s hands could be [?]
under his gartan stands – long hose
effigy in full High[land] dress target
and clogaid – On Iona stone in
tunga Sir Allan Two Iona stone
inside church 12 or 13 slates in
Length & 6 ab[ou]t 10 or 12 f[ee]t wall a[?]
Two lancet under on E[ast] end and close
togeth[er]. Supports on both win[dow]s
of bow (East) and to keep up build
ing walls. Tung of Sir Allan
on s[outh] side of east corner.
Sir Allan of Brolas family.