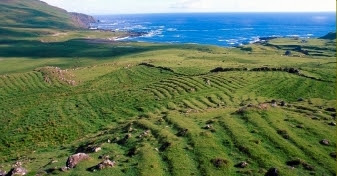 A fairly long and self-explanatory note was taken down by Alexander Carmichael, on 20 October 1884, from the recitation of Angus MacQuarrie (c. 1845–1925), a schoolmaster belonging to Tigharry in North Uist. Around this time, Carmichael was collecting material relating to agricultural traditions as he was commissioned to write a paper subsequently entitled ‘Grazing and Agrestic Customs of the Outer Hebrides’. The contents of this article had a profound influence on Lord Napier as the introduction written by Carmichael tells:
This paper was written at the request of Lord Napier and Ettrick for the Crofter Royal Commission, over which his Lordship presided…The paper is hurried and fragmentary, and contains but little of what might have been said of the interesting people and customs of the Western Isles.
“The account of the old customs is the most interesting thing in your Report; the old hymns are also charming”- Extract of a Letter from a Nobleman in London to Lord Napier.
The spade-work carried out by Carmichael in this instance paid off judging by the compliments he got for his well-received paper.
The Hosta ten[an]ts div[ided] the land at tiny
intervals from Nov[ember] to May. The area
did on any part occasion is regu
lated to some extent by the quantity
of seaweed at their disposal They
div[ided] a field into a sets of rigs each
set consisting of five of equal
area – there being five tenants
in the place. Each tenant
takes possession of the rig in
the first set falling his lot and
keeps it as long as continuous crop-
ping goes on – a period of from
two to three years according to the
nature of the soil. If the rigs in the
first set very with respect to quality
in terms of the arrangement or
the agreement the man to
whose lot the worst rig in the
first set has fallen get his choice
of the rigs in the second sets.
Perhaps this privilege is conceded
to two or three each in his turn,
getting his choice in the second
sets so that the man to whose lot
the best rig fell in the first set
must be contend to accept
the worst rig in the second set
and so on of the other tenants
according to prearranged
prescribed rules – This aims
at balancing pasture to all as
nearly as possible – If the field
is uniform as to quality lots
determines which rig it to be own
ed by each tenant. But if the field
is irregular in quality the order
of possessorship in the first set
is reversed in the second set
Thus the man who gets the first
rig in the first set gets not by
lot but by fixed rule the fifth
rig in the second set. This is the
system at Caolas Paible and
Heisgeir as well as Hosta.


References:
Carmichael, Alexander, ‘Grazing and Agrestic Customs of the Outer Hebrides’ in the Report of the Commissioners of Inquiry into the Condition of the Crofters and Cottars in the Highlands and Islands of Scotland (Parliamentary Papers 1884 xxxiii–xxxvi), 451–82.
CW 112/61, fos. 12r–13r.
Image: Runrig.
at 11:09