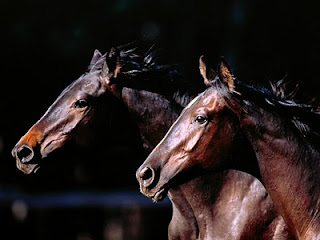 Sandwiched between notes about fish spawn and Latha Fhèill Mìcheil (Michealmas), John Ewen (Iain Eòghann) MacRury of Torlum, Benbecula, wrote down interesting notes consisting of Gaelic vocabulary and dialectical variations regarding horses. It is no coincidence that this short note presages another note about Michaelmas for this day was renowned for horse races. In some Roman Catholic districts of the Highlands and Islands the 29th of September was referred to as latha na marcachd (‘the riding day’), where horse races were held and where other celebrations were performed in order to mark this special day in the calendar.
Bionach or Biorach
In one part of Skye a
colt or a filly is called
Bionach whereas in an-
other part of it the word
is changed into Biorach,
In Uist & Barra it is
generally termed Loth,
whether masc[uline] or fem[inin]e.
In Harris they term a
foal, Isean an eich (or
the chicken of the horse),
till they are six month[s],
and after that till they
are put in harness are
termed Spriodach, Faol
Searach, in Uist when
a foal is six month[s]
it is generally termed both
afterwards Blia[dh]nach,
Da-bhlia[dh]nach Tri-bhli[a]dh
nach, above that termed
horse or mare, a horse
is at its best at seven
a mare at nine if not
ill used, As long as the
four leggs of the animal
are right and the inside
souind good feeding and
cleaning will build up
the frame