Sealing the Fate of Odar 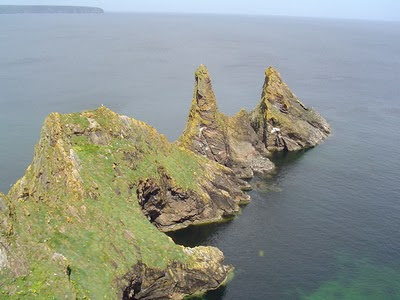 As is generally well known the Norse had a lasting impact on the Western Isles since they first invaded and then settled in the islands and western seaboards of the . The following historical legend was recorded by Alexander Carmichael at some point in 1875 from the recitation of Major James Andrew MacRae (1834–1873) of Valley and Griminish in North Uist.

Odar was a great Scandinavian robber

sea king – a Viking – who ravaged the
coasts of these Western Isles often the
expulsion of the Norsemen and the
crowing of Macdonald as Lord of the
Isles. The King of the Isles announced
that he would give a fitting reward to any
man who would bring him Odar’s head
dead or alive. All were eager to dis-
tinguish themselves in capturing the
great robber King. “Ga luath an sionnach
beirear uairigin eir” Odar was captured
at last at a point of land at Griminnish
called “Odair.” This was done by
MacUistean Ghriminnish a near relation
of Māg Onuil Lord of the Isles.
Macuistean carried Odar’s head to his
chief. In return for this signal service
in getting rid of this ocean pest – this
biast mhor a chuain – the Lord of the
Isles granted to MacUistean and to his
posterity the seals of Haisgeir. Seals
then were prized equally for food and
oil – (Bu mhath am biadh feamanaich
aran seagail agus sail roin)
Odar’s head was buried at a spot
known as Earann Mholach…

It may be adjudged that the reward given to MacÙisdein was not in proportion to his doughty deed in getting rid of the Norse menace but this would be far from the truth for seals at that time were prized for both their oil and as a foodstuff. There would hardly be anything left of a seal carcase that was not put to some good use or another. The narrative then continues to describe how each seal was portioned amongst the boatmen and people of Griminish, Kilpheder, Scolpaig and how different seals were given to the minister of Kilmuir ‘to offer up in sacrifice to the “gods”’ for the safe return of the seal hunters, the blacksmith and the people of Boreray.

It may also be added that Martin Martin, writing in the seventeenth century, tells how the men of North Uist caught seals in a narrow channel by means of a net of horse-hair ropes ‘contracted at one end like a Purse', and gives a detailed account of a seal-hunt on the Isle of Heisker:


When this crew is quietly landed, they surround the passes, and then the signal for the general attack is given from the boat, and so they beat them down with big staves. The seals at this onset make towards the sea with all speed, and often force their passage over the necks of the stoutest assailants, who aim always at the forehead of the seals, giving many blows before they be killed; and if they be not hit exactly on the front, they contract a lump on their forehead, which makes them look very fierce; and if they get hold of the staff with their teeth, they carry it along to sea with them. Those that are in the boat shoot at them as they run to sea, but few are caught that way. The natives told me that several of the biggest seals lose their lives by endeavoring to save their young ones, whom they tumble before them towards the sea. I was told also that 320 seals, young and old, have been killed at one time in this place. The reason of attacking them in October is because in the beginning of this month the seals bring forth their young on the ocean side; but those on the east side, who are of the lesser stature, bring forth their young in the middle of June.