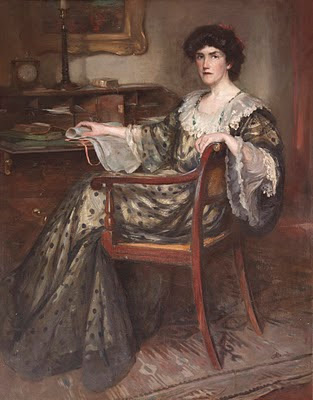 In 1974, the Department of Celtic at the University of Edinburgh was presented with a portrait of Alexander Carmichael’s only daughter, Elizabeth (Ella) Catherine (1870–1928), by Michael Carmichael, MRCVS, of Tigh-a-Bhet, Fort William, nephew of Ella and a grandson of Alexander Carmichael. Some years ago, Professor William Gillies, holder of the Chair of Celtic at the , wrote a short piece about her portrait. We would like to express our gratitude to Professor Gillies for his permission to reprint in part what he wrote about the portrait that now hangs in the same room as that of her father’s portrait by William Skeoch Cumming (mentioned in a previous blog) in the Department of Celtic and Scottish Studies.

Seated towards the left at a desk, the sitter turns to face the onlooker with one hand on the back of her chair, the other resting on the desk and holding a scroll.  She wears a long evening gown and necklace of green stones. There is a clock, candle and part of a picture visible in the background. The artist creates the impression of an intense and artistic personality.
Ella Watson (born Elizabeth Catherine Carmichael) was a leading light in Highland and Celtic circles in Edinburgh from her student days in the 1890s until her death in 1928. She was, moreover, one of the stalwart ladies of Gaelic scholarship – both directly, through her personal contributions to the discipline, and indirectly, as the daughter and amanuensis of the Gaelic folklore collector Alexander Carmichael, as the wife of William J. Watson, Professor of Celtic at Edinburgh, and as the mother of James Carmichael Watson, who succeeded his father in the Chair of Celtic.
Born in her father’s native Lismore, she spent most of her early childhood in the Uists, where he was an Inland Revenue Officer. Although she received her secondary schooling in Edinburgh, she never lost her sense of belonging to the Highlands, nor her facility in speaking Gaelic. In 1892 she started at the University, and distinguished herself in Professor Mackinnon’s Celtic classes between then and 1895. Her involvement in promoting Gaelic causes began in 1894, when she helped to found the Celtic Union. She also showed crusading zeal in another area: finding herself debarred as a woman from joining the University Celtic Society, she promptly founded the Women Students’ Celtic Society, which flourished until the mores of a later age enabled an honourable merger to take place.
Despite her more sociable commitments, she did not neglect her Gaelic literary studies. After helping her father transcribe and edit the material for his Carmina Gadelica (published in 1900) she was a prime mover in the scheme to launch the Celtic Review, a scholarly journal which she then edited from 1904 to 1916, in a highly creditable way.
In 1906 her marriage necessitated a move to Inverness, where Watson was Rector of the Royal Academy; but they returned to Edinburgh three years later on his appointment as Rector of the Royal High School, a post he filled until his translation to the Chair of Celtic in 1914. The Watsons’ home (at first in Spence Street, and latterly in Merchiston Avenue) became a hospitable resort for all with Highland or Celtic connections. Even so, Mrs Watson found time to continue with her scholarship and good works. After her father’s death in 1912 she worked for many years on a revised edition of Carmina Gadelica, which appeared, shortly after her death, in 1928.
Of her two sons, the elder died in childhood, but the younger, James, fulfilled his mother’s deepest hopes, carrying all before him academically, and matching her enthusiasm for Gaelic language and literature. Her death, after a period of illness, came at a relatively young age; it deprived her of the joy of seeing her son follow in his father’s footsteps, though it also spared her the tragedy of his premature death on war service in 1942.
A Jack Yeats crayon sketch of Ella Carmichael, executed in 1902, and reproduced as frontispiece to Carmina Gadelica, Volume III, emphasizes her slightly intense, girlish beauty. The University portrait is of a slightly later date. The work of C. H. Mackie, it conveys something of the serenity, idealism and loving kindness which stand out in the reminiscences of all those who knew her.